Occasionally, you may need to install npm packages while offline. This could be due to a flaky network connection, being on a flight or during a workshop. Getting this working has been a dream for a while.

They say you should follow your dreams. Unless it's been a while and they haven't followed you back, in which case unfollow them and move on. Luckily, there are a few options available to get npm working offline today.

First, a built-in (but ultimately incomplete) option. In theory, when you want to force installation from the npm cache, you can use the --cache-min flag with a high value. To install a package from the cache, run:

Alternatively, use npm --cache-min Infinity. Typing this out every time you need it is a little tedious, so alias it in your dotfiles. In my bash files, I've previously used:

In an ideal world, the npm client would just alias this to --offline. So, why isn't this just a default in npm3?

It's the hero Node deserves, but not the one it needs right now

The above --cache-min hack has a number of pretty undesirable shortcomings.

When using it, npm still connects to the registry over the network if a package has dependencies that aren't already in the cache. It will also fail if you install a package that depends on a newer version of a package than the one installed in the past.

The npm team have concerns about shipping a proper offline flag as-is as most users aren't going to understand the subtleties of how the npm cache works. This is understandable. From what I gather, they are open to eventually shipping full support for an offline experience but until then, let's look at some third party stop gap solutions.

A significantly more robust solution to --cache-min is Nolan Lawson's offline-first local-npm package (which I love). It's a Node server that acts like a local npm mirror (without needing to do a complete replication of the whole npm registry).

Using local-npm, your npm installs are fetched from the registry and then modules and their deps get stored in a local PouchDB database. This caches them so subsequent npm installs use the local cache rather than calling to the network. local-npm also takes care of keeping modules updated when they change. It does this by listening for changes to the remote registry so you don't have to worry about staleness. 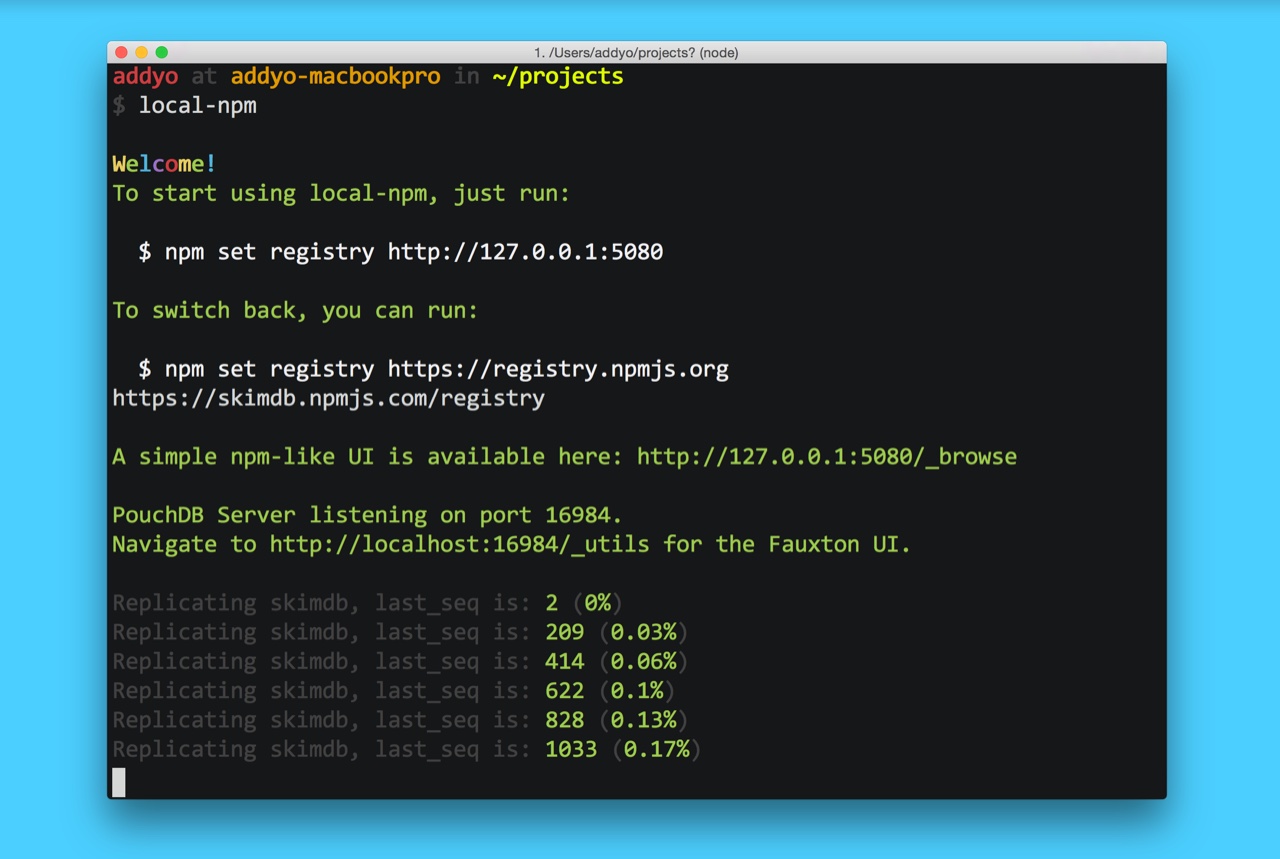 To get local-npm installed, run:

npm is built on top of CouchDB. local-npm replicates the skimdb part of this database to a local PouchDB instance. Running:

will begin the replication process. There's no need to wait for the complete skimdb download (which can take a few hours). It will fall back to the network for any libraries that aren't yet replicated. As mentioned, local-npm is offline-first. It has upfront replication for metadata and tarballs download the first time you install a specific version.

To complete setup, you'll want to go ahead and set npm to point to the local server local-npm is running:

Awesome. You should now be able to open up a new tab and just npm install any dependencies you require using the caching proxy.

Here's what a successful offline npm install should look like:

and for posterity, here's a tab where I'm running local-npm and we can see it correctly proxying through requests for both the bluebird and lodash modules:

To test everything works as expected:

A handy extra that comes with local-npm's server setup is a simple in-browser UI for browsing local modules and searching for them. You can access this at http://localhost:5080/_browse. 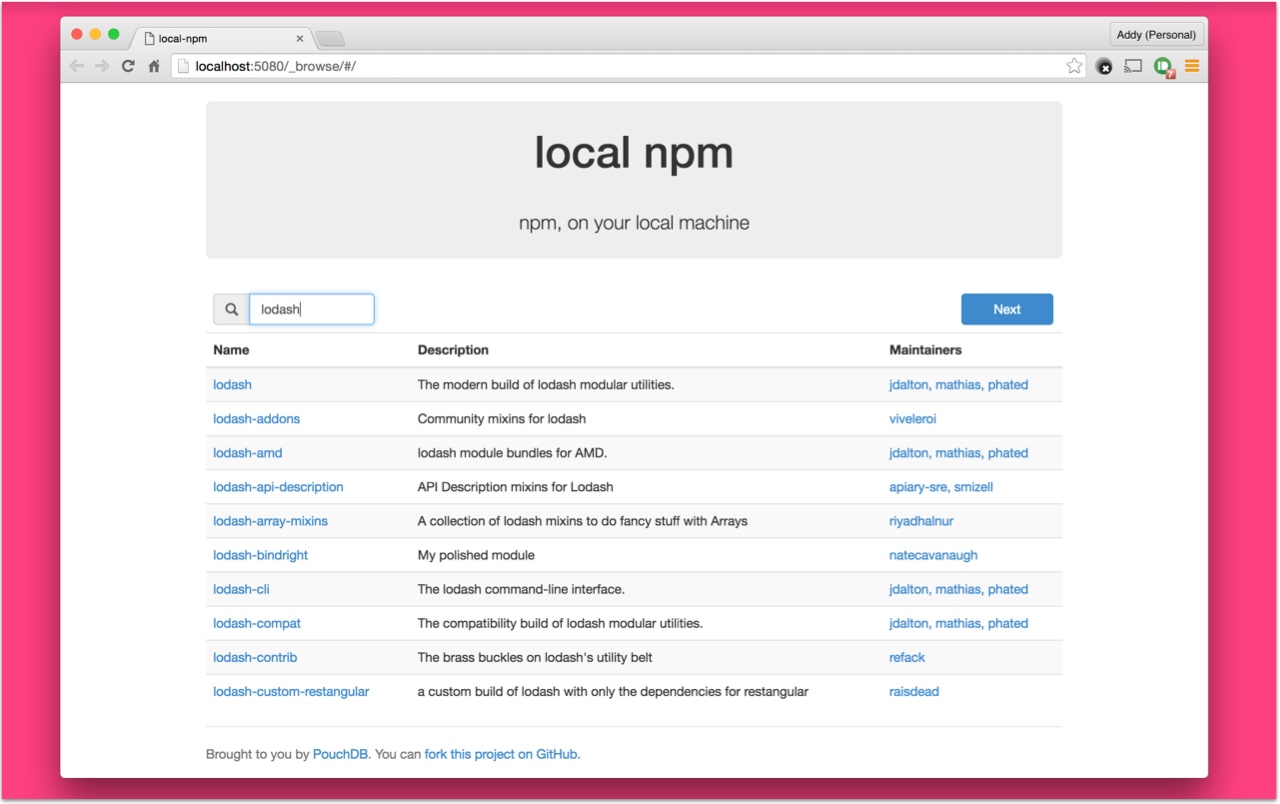 Publishing packages from local-npm doesn't require any change of registry configuration. Just ensure you're online and everything should work as expected.

As a reminder, in case you need to switch back to the main registry or your preferred mirror for any reason just use npm set once again:

Although local-npm is pretty great, it's not specifically the direction the npm team want to head in for their offline support. Regardless, it's still a pretty solid stop gap for today and I strongly recommend giving it a shot.

Since publishing this post, Nolan has also shared some speed tests comparing local-npm to regular npm. In short, regular is faster the first time you npm install a package, but after this local-npm is consistently faster by an order of 2-3 times.

Using local-npm with other tools

I tested local-npm with Yeoman and Yahoo's generator-fluxible, which only uses npm for package management. As you can see below, everything including dependency installation worked fine and I was able to preview the output from a cached install without issues: 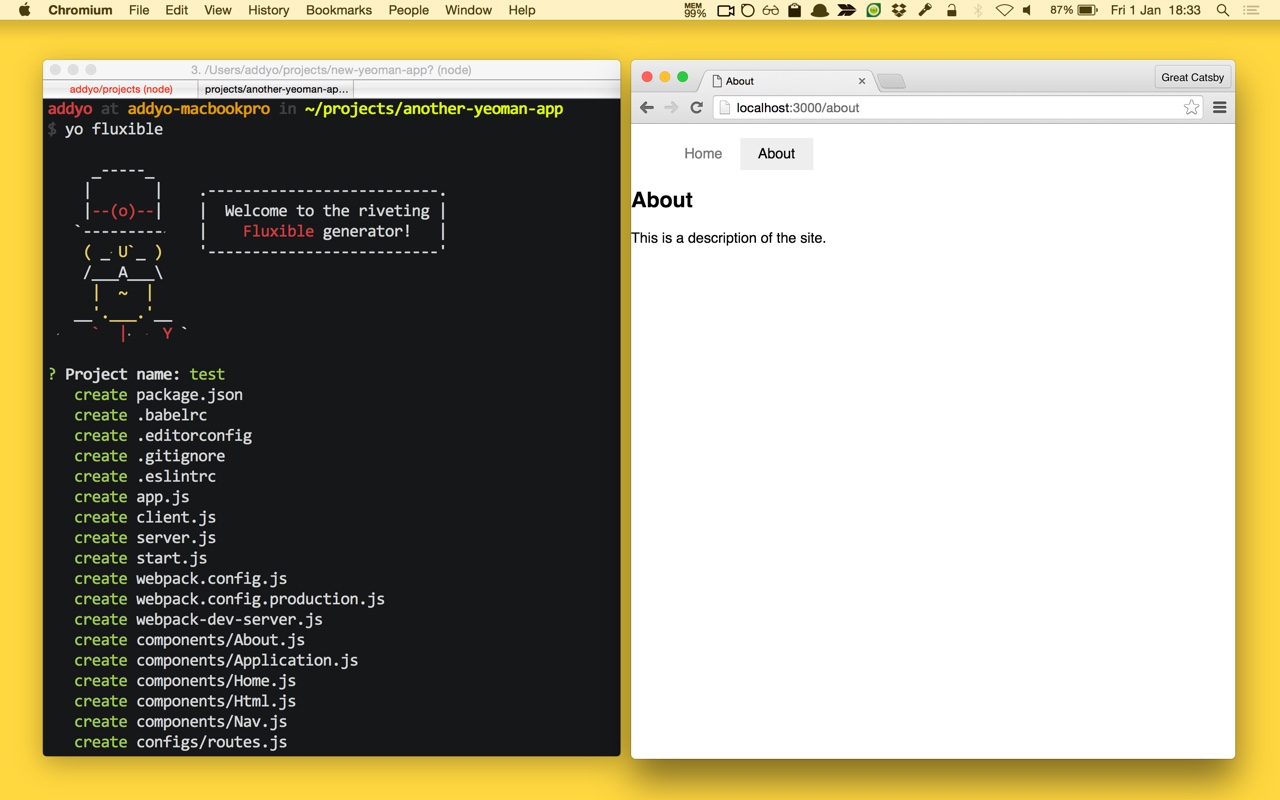 Another popular lazy caching proxy for npm is npm_lazy. Similar to local-npm, once setup any modules requested that aren't in the local cache are fetched from the npm registry lazily.

In npm_lazy, the only things cached are package index metadata and package tarfiles. Pretty much all other endpoints get transparently proxied. This means an npm install for cached packages will always work and (mostly the same as local-npm), more exotic endpoints won't work if the main registry or mirrors are down - they'll act as their non-npm_lazy equivalents. 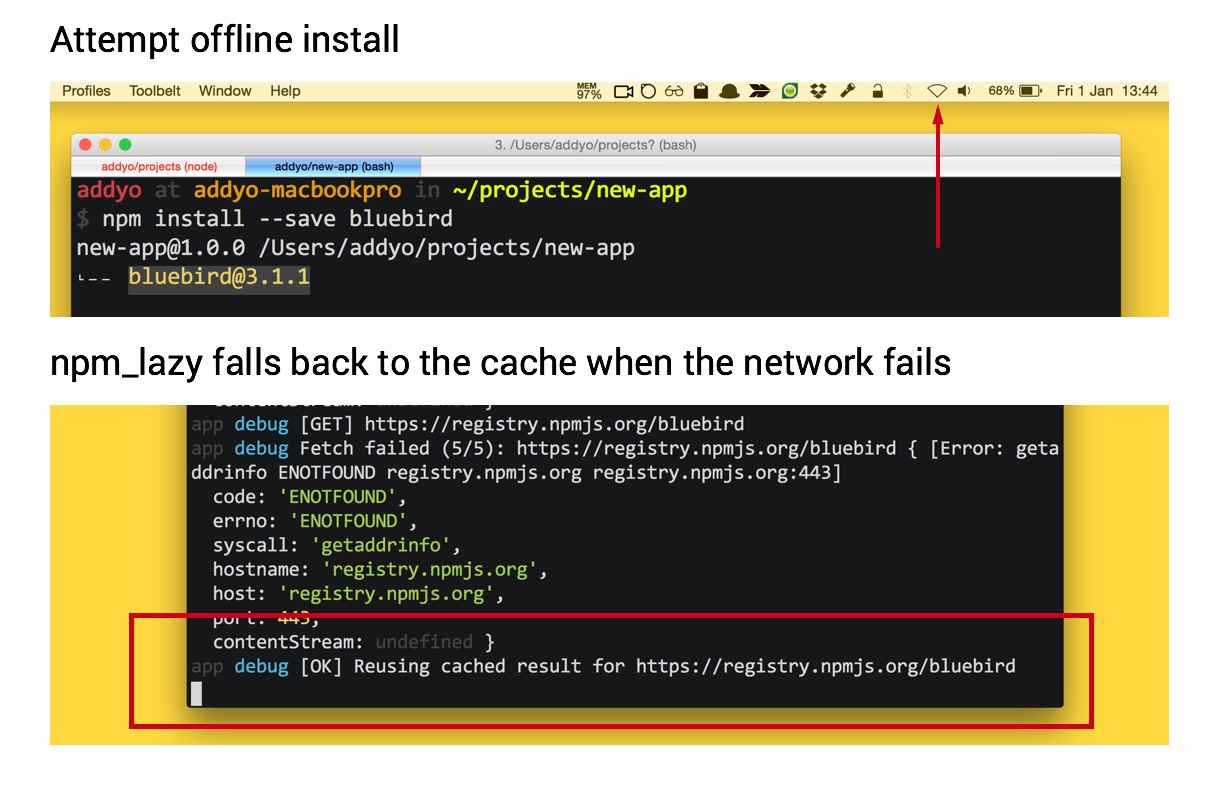 To start the server, run:

Similar to local-npm, the registry can be set to the local server running as follows:

npm_lazy has a relatively decent level of configuration, allowing customisation of the lifespan of the cache, maximum retries, HTTP timeouts and whether HTTPS requests are checked against Node's list of certificate authorities.

There have been numerous other packages written that aim to offer a caching proxy for npm (such as Sinopia), but I've tried to keep the list short to avoid choice paralysis.

In this post I've looked at offline package installation, but you may also be interested in offline package bundling. This is where you want to bundle a package and all of its dependencies into a single archive for sharing with a system that might be offline. This comes up a lot in workshops.

There's an open issue on npm to try improving the bundling story around npm pack and bundledDependencies. Until this comes to fruition, I recommend trying out either: