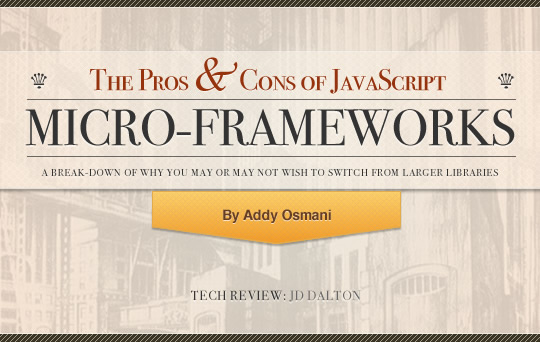 The concept of the JavaScript micro-framework has always existed, tackling tasks ranging from client-side templating through compact solutions for MVC-architecture and beyond. With an increased recent interest in combining such focused solutions into a custom modularized framework for your production needs (as opposed to say, using a larger library that tackles broader concerns), I thought it would be interesting to take a look at micro-frameworks to find out what the true pros and cons of using them might be.

Before we get started, I should mention that whilst I have an involvement in the jQuery Project, I subscribe to the notion of using the best tool for the job at the end of the day, whether that happens to be an established library/toolkit/framework (eg. jQuery, Dojo) or an alternative micro-solution. Hopefully this post will come across as balanced in that respect.

It's no secret that with each subsequent release, well-established libraries, frameworks and toolkits increase in size and this has some developers questioning whether the entire stack of functionality provided is required for the average site or project. We live in an age where performance and page-load time are constantly under scrutiny and thus, a developer couldn't be blamed for attempting to cut down unused code from their site's overall load.

The reality is that you may only wish to use a subset of features offered in a library like jQuery (eg. selection, animation) but may not require support for ajax, DOM-associated data storage, deferreds and others. The library may also not provide everything your project needs (it's naive to think it ever would), however we can appreciate a developer asking whether that 30KB+ download of the library could be replaced with something significantly more modular that does cover more of their own needs.

This is an area where using micro-frameworks can potentially offer the greatest benefit to a project (especially where mobile is specifically targeted).

Thomas Fuchs has been attempting to make developers more aware of micro-frameworks through efforts such as microjs.com (which you should check out) and there certainly appears to be enough interest in modularized frameworks for a broader discussion on micro-frameworks to keep going.

Some prominent JavaScript developers certainly have strong feelings about them on both sides of the debate. The release of Ender.js (a package management system for creating your own modular library) has also prompted developers to consider giving micro-frameworks a shot and may be worth a cursory look.

The pros and cons of micro-frameworks

Let's now take a look at what I consider the pros and cons of micro-frameworks:

So, should you consider dropping that large library for a micro-framework?

As the majority of developers I've spoken to regarding micro-frameworks have brought up jQuery's filesize as their reasons for considering a switch to the micro-approach, I'll address a few concerns here. Bear in mind this is my personal opinion and may differ with those held by other members of the community:

By selecting an option such as Ender’s Jeesh starter-pack (a fraction of jQuery's 30KB), you actually may lose quite a significant amount of cross-browser stability and consistency. Edge-cases actually account for some of the smaller quantities of code in jQuery core, but it’s smoothing out issues with WebKit and IE that are most highly catered for behind the scenes. I’m not attempting to finger-point Ender out at all, but it is essential you’re aware of what you may be gaining vs what you may be losing.

In addition (and something quite important to note) most of what we've used micro-frameworks for in the past are features which jQuery doesn't (and may well never) provide in the future: MVC helpers, browser state management/routing, pub/sub, baked-in templating, cross-browser storage, (a)synchronous script loading and more.

If you don't require it’s features, there is absolutely nothing wrong with falling back on vanilla JavaScript (or another library) for your selection needs. Just as long as you're *sure* that's all your project demands.

Remember that jQuery's biggest strengths lie in being the best cross-browser DOM-manipulation and selection option out there at the moment. It's mature and for the most part, reliable. Whilst I know developers would like something more modular, John Resig has said on multiple occasions that a truly modular version of the library would be very difficult to put together and likely won't be on the cards anytime soon.

With this in mind, if you absolutely know what you're doing (and what to look for) you can of course select a more modular-suitable substitute, but you should heavily test whatever you replace it with to ensure it's on par with both Sizzle and the rest of the library's capabilities you'll require.

When deciding on which option works best for you, bear in mind both your current and future needs, level of browser compatibility required and the level of confidence you have in deploying a custom baked solution to production.

At the end of the day, it's up to each individual developer to make a judgement call here on which option makes the most sense for them (and their team) will ultimately depend on which solution satisfies the majority of your needs the best.