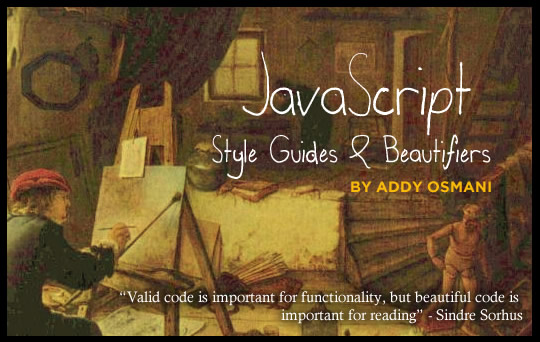 What exactly is a style guide?

Before we begin, let us remind ourselves exactly what a code style guide is:

A style guide or style manual is a set of standards for the writing and design of code. The implementation of a style guide provides uniformity in code style and formatting, often covering guidelines regarding indentation (tabs vs. spaces), variable and function naming conventions, where best to apply whitespace and so on.

Why is consistent code style important?

They say that good code is it's own documentation. Whilst I don't completely agree with this (docs are important!), the fact is, the more readable our source code is, the easier it is to maintain.

Following a consistent style guide both helps enforce this concept and improves the overall quality of the code we write. This facilitates other developers stepping in to assist with maintenance more easily and can certainly save time in the long haul.

Readable source code is arguably easier for us to understand as well. It's easier to browse, locate and fix bugs in and more easy to optimize. It can also give us a clearer picture of how the code fits into a larger body of work. This is not to say that poorly styled code is badly written code. Indeed, I've seen several cases of code which were styled quite poorly, but were in fact, very efficiently written solutions on the whole.

Advocating for the use of style guides is great, but it doesn't mean a great deal if only 1% of developers are seriously considering using them. To get a better gauge on this, I did an informal survey on Twitter, asking developers whether they were using a style guide for the JavaScript they were writing.

I received a relatively good sampling responses, below of which are a few:

For developers interested in improving the code style consistency of the JavaScript they write, I'm happy to recommend the following style guides:

As two developers mentioned using the NPM style guide for their projects, I'll mention it in passing. Designed with reducing visual clutter in mind, this minimalist guide does contain similar practices to those seen in other guides above but is probably what I would consider a 'light' set of guidelines. The recommendations in 1-6 should definitely be considered more comprehensive.

Note: I've reviewed all of the above and discarded some other guides that were either entirely too brief/vague or (in my opinion) not that useful at all (e.g the GitHub JavaScript style guide).

A Tutorial On Applying The Principles Of Idiomatic Code Style

Let's go through a brief tutorial. Here is a functional block of code that doesn't follow any particular guidelines on code style:

There's technically nothing wrong with it that would prevent it from running, but it could certainly be improved.

In order to better appreciate the impact of a consistently readable code style, let's go through this sample line-by-line and compare how it would look if we were to apply the Idiomatic.js style guide to it.

We will compare what the code looks like before and after it's been stylized and I've added notes in case it isn't clear on first glance.

What changed? We improved readability by:

And we also had inline variables in our for loop:

Note: I'm aware there is much more that can be done to improve the original code sample. A proper solution would include type checking against bar, baz and fum (and more), however for tutorial purposes, I wanted to focus on styling the core concepts.

Whilst maintaining consistent style while writing your code is extremely important, it can also be useful to use a formatter or beautifier to enforce style rules for you.

Malte Ubl recently suggested that I try out Google Closure Linter. This set of useful Python scripts first allow us to lint our JavaScript against the Google JavaScript Style Guide, outputting a list of syntax and semantic changes needed to make our code Style-guide compatible. Users of tools like jsLint and jsHint will find following the output quite similar to what other linting tools report (line by line errors with the breaking issue reported) making it quite straight-forward to adjust our code accordingly.

The Closure Linter doesnt just lint code, however. It also includes a script called fixjsstyle which allows us to force (or beautify if you prefer) our code to follow Google's Style Guide.

Now, it is possible to use both the linter and beautifier scripts independently, but as a Sublime Text user, I would love to be able to simply use some keyboard shortcuts to lint or beautify my code using Closure Linter as I write it. Thankfully, someone already thought of this and theres a handy Sublime package available that does just this.

jsBeautifier is another useful tool which you've most likely heard of before if not currently using at the moment. It accepts everything from poorly formatted JavaScript to fully minified code, applying a number of spacing/break best practices for making the code more readable. Its been possible to just use jsBeautifier from the terminal (and the popular jsbeautifier.org website) since it was first released, but similar to Googles Closure Linter, it would be incredibly helpful to have this available from directly within our text editor.

Luckily, there is also a Sublime Text package for jsBeautifier which can be downloaded from here. Installation just takes a minute.

Note: You may also be interested in jsFormat - another JavaScript formatting plugin for Sublime which similarly uses jsBeautifier. It's also available on Package Control and should show up in your install list with no changes.

Whilst the above two beautification tools are helpful for improving readability, what developers really need is a solution thats more flexible.

We might not fully agree with the style guide choices enforced by Google Closure Linter or jsBeautifier. What if we would rather our code followed Rick Waldrons Idiomatic.js style guide? or the Dojo style guide? or something more custom?. It doesnt really make a great deal of sense to create new tools for supporting beautification of each individual type of style guide but thankfully there's a tool we can use to solve this problem.

It's a node.js based solution called Code Painter and it allows us to specify a sample JavaScript file following whatever style guide we wish as input, along with the code we would like beautified. Code Painter will infer the style rules to follow based on the sample and then transform our input as necessary.

From Jakub Wieczorek, the developer:

Code Painter is useful when you're working on a code change to a project and you want to make sure your new code fits its style. This could also be integrated with an editor so that it reformats your code as you type based on the style you've been using so far in a particular file. The solution is essentially a pipeline that consists of a tokenizer based on Esprima (with a few modifications to preserve comments and whitespaces), then a bunch of different style processors in the middle (one for each style property) and ends with a serializer that turns the token stream back into source code (this is a completely lossless process).

At the moment Code Painter only supports transformation of about 7 aspects of code style, but this may be enough for your needs. It shouldn't take long to see if it's able to handle the specific style rules you would like your project to enforce, so do check it out!

Code Painter can be grabbed from here and used as follows (assuming you already have Node):

That's it. I hope this guide is at least a little useful to someone out there : )

I'm always eager to hear about other takes on this topic or other published style guides. If you would like to contribute to the discussion, feel free to leave a comment or hit me up on Twitter. Cheers!

Many thanks to Sindre Sorhus for his technical review of this post and many useful suggestions that helped improve it.