There's been much welcome discussion about Progressive Web Apps lately. They're still a relatively new model, but their principles can equally enhance apps built with vanilla JS, React, Polymer, Angular or any other framework. In this post, I'll summarise some options and reference apps for getting started with your own PWApp today.

What is a Progressive Web App?

A Progressive Web App uses modern web capabilities to deliver an app-like user experience. They evolve from pages in browser tabs to immersive, top-level apps, maintaining the web's low friction at every moment.

It's important to remember that Progressive Web Apps work everywhere but are supercharged in modern browsers. Progressive enhancement is a backbone of the model.

Aaron Gustafson likened progressive enhancement to a peanut M&M. The peanut is your content, the chocolate coating is your presentation layer and your JavaScript is the hard candy shell. This layer can vary in color and the exerience can vary depending on the capabilities of the browser using it.

Think of the candy shell as where many Progressive Web App features can live. They are experiences that combine the best of the web and the best of apps. They are useful to users from the very first visit in a browser tab, no install required.

As the user builds a relationship with these apps through repeat use, they make the candy shell even sweeter - loading very fast on slow network connections (thanks to Service Worker), sending relevant Push Notifications and having a first-class icon on the user's homescreen that can load them as fullscreen app experiences. They can also take advantage of smart web app install banners. 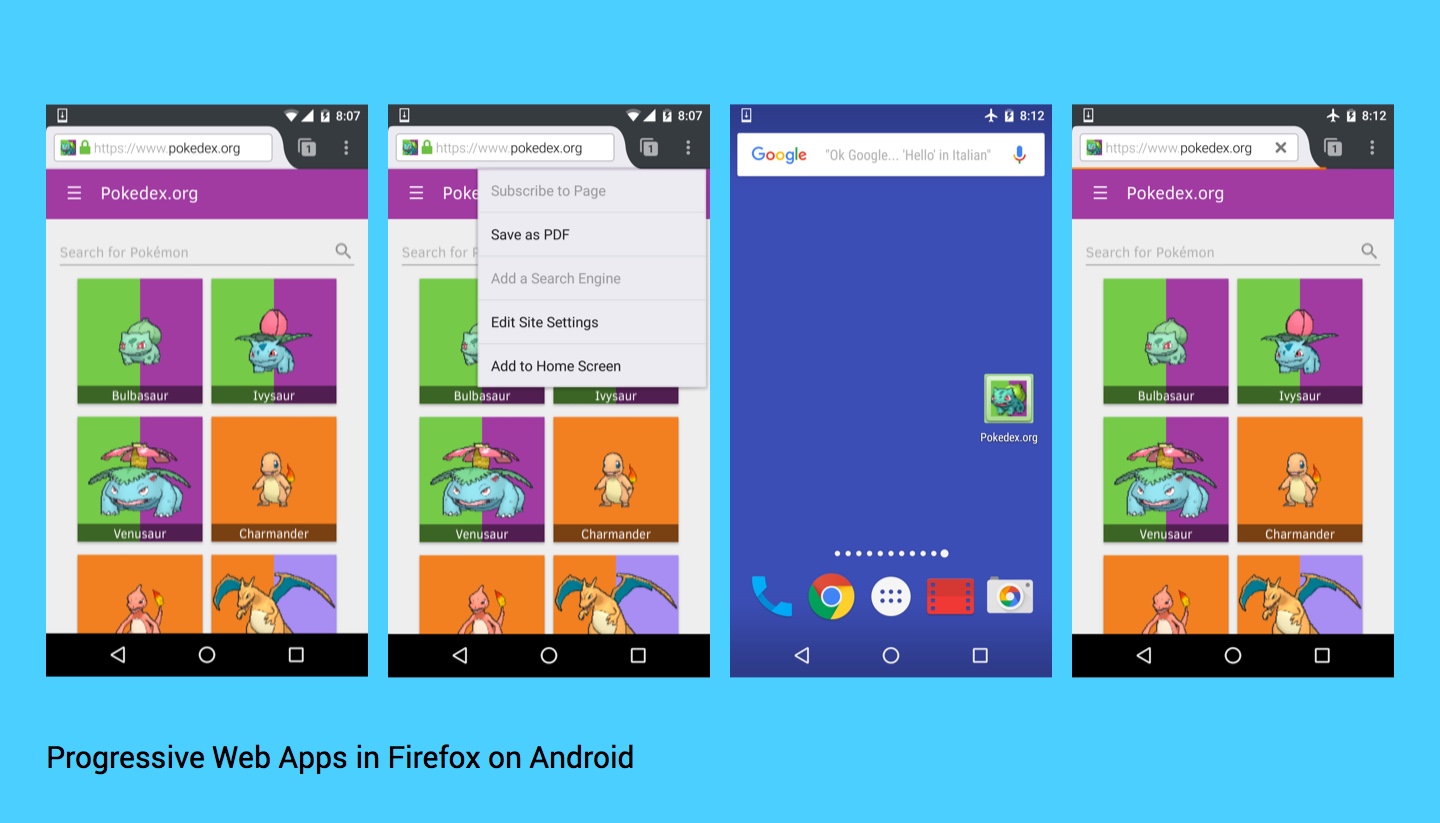 One of the nice aspects of the "progressive" nature to this model is that features can be gradually unlocked as browser vendors ship better support for them. Progressive Web Apps such as Pokedex also of course work great in Opera on Android too with a few notable differences in implementation: 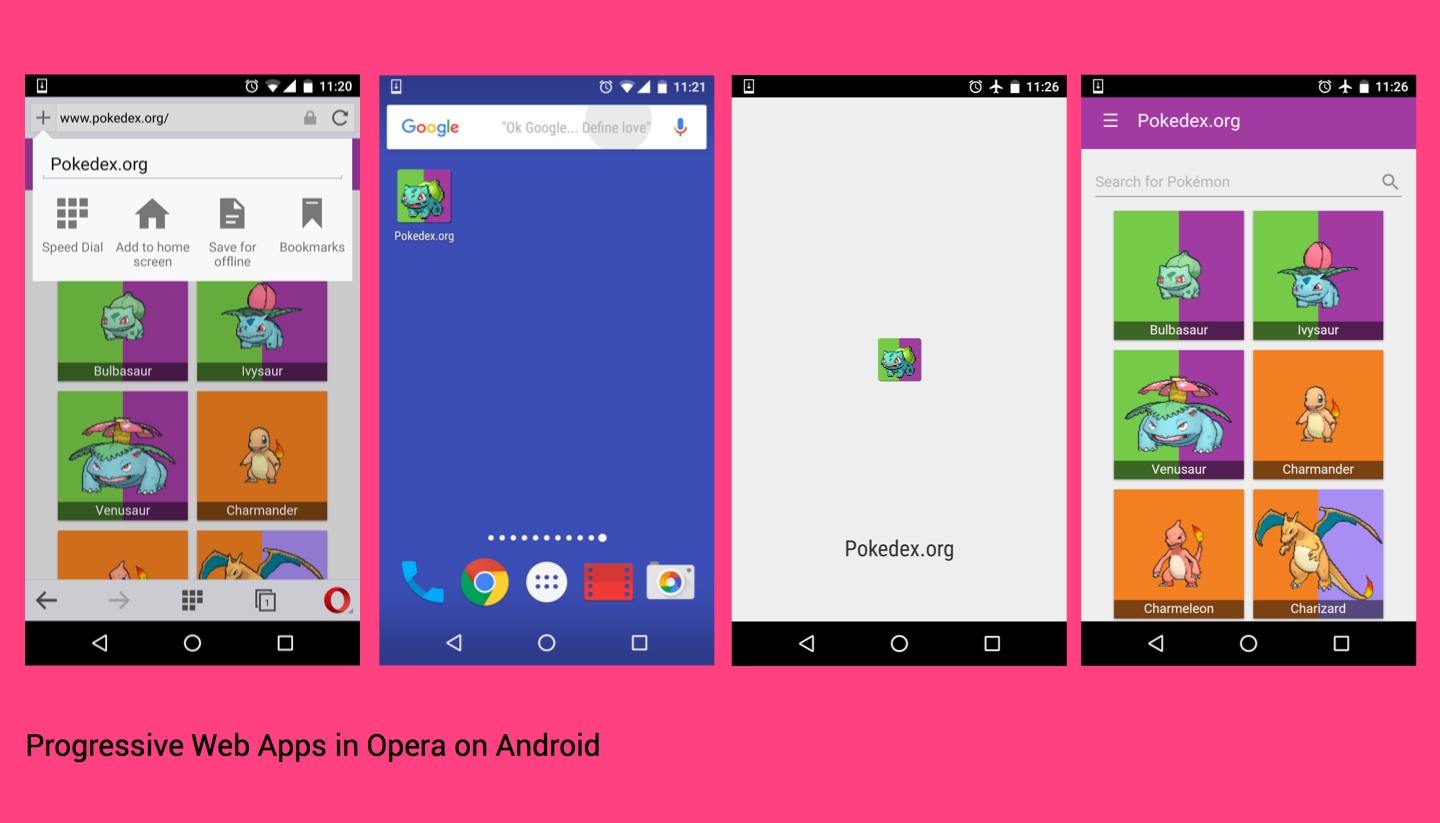 The Manifest for Web applications is a simple JSON file that gives you, the developer, the ability to control how your app appears to the user in the areas that they would expect to see apps (for example the device home screen), direct what the user can launch and more importantly how they can launch it

The manifest enables your web app to have a more native-like presence on the user's homescreen. It allows the app to be launched in full-screen mode (without a URL bar being present), provides control over the screen orientation and in recent versions of Chrome on Android supports defining a Splash Screen and theme color for the address bar. It is also used to define a set of icons by size and density used for the aforementioned Splash screen and homescreen icon. 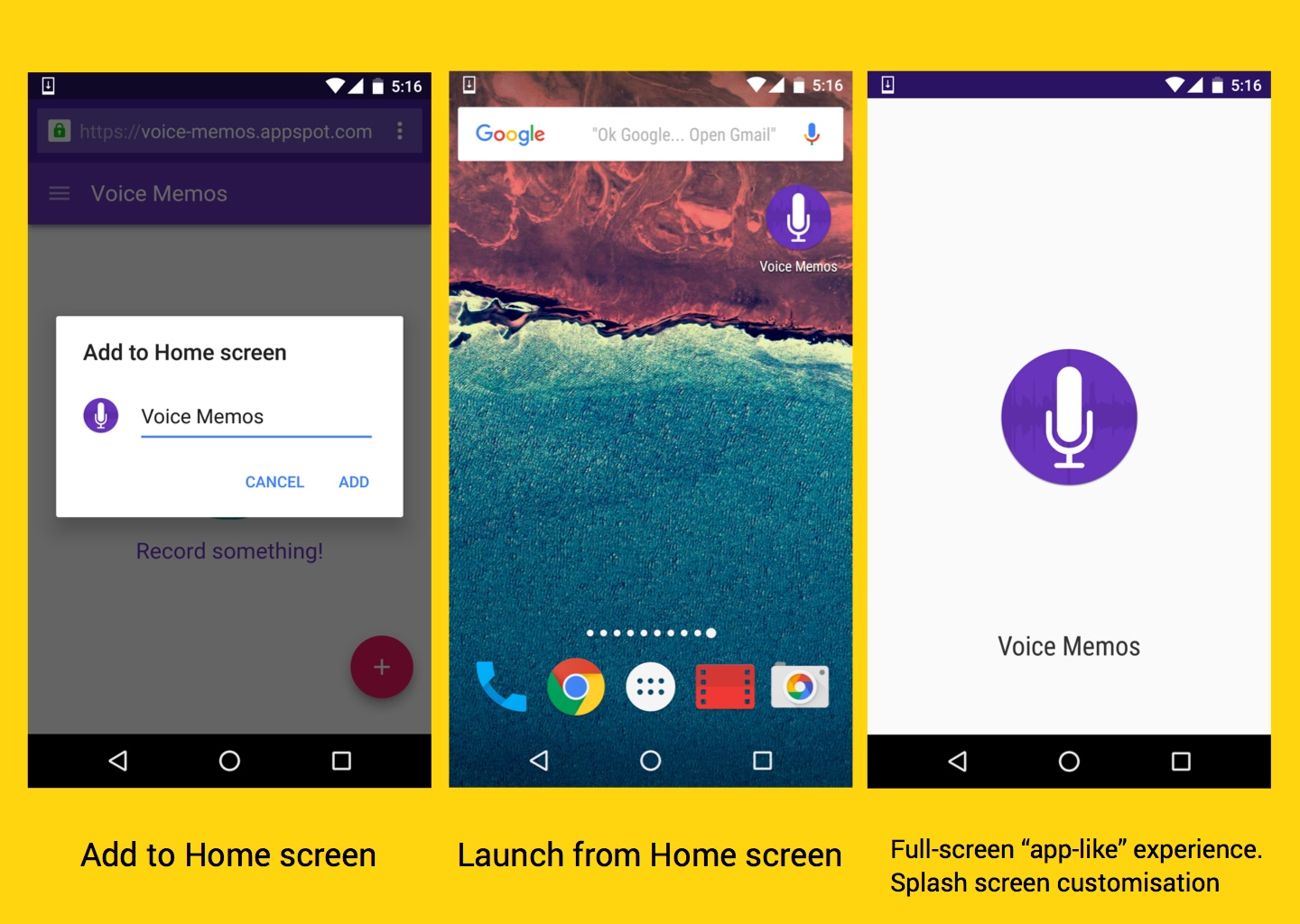 A sample manifest file can be found in Web Starter Kit and over in the Google Chrome samples. Bruce Lawson wrote a Manifest Generator and Mounir Lamouri has also written a handy Web Manifest validator worth checking out.

In my personal projects, I rely on realfavicongenerator to generate the correctly sized icons for both the Web App manifest and for use across iOS, desktop and so on. The favicons Node module is also able to achieve a similar output as part of your build process.

Chromium-based browsers (Chrome, Opera etc.) support Web App manifests today with Firefox actively developing support and Edge listing them as under consideration. WebKit/Safari have not yet posted public signals about their intents to implement the feature just yet.

For more details, read Installable Web Apps with the WebApp Manifest in Chrome for Android on Web Fundamentals.

Chrome on Android has support adding in your site to the homescreen for a while now, but recent versions also support proactively suggesting sites be added using native Web App install banners. 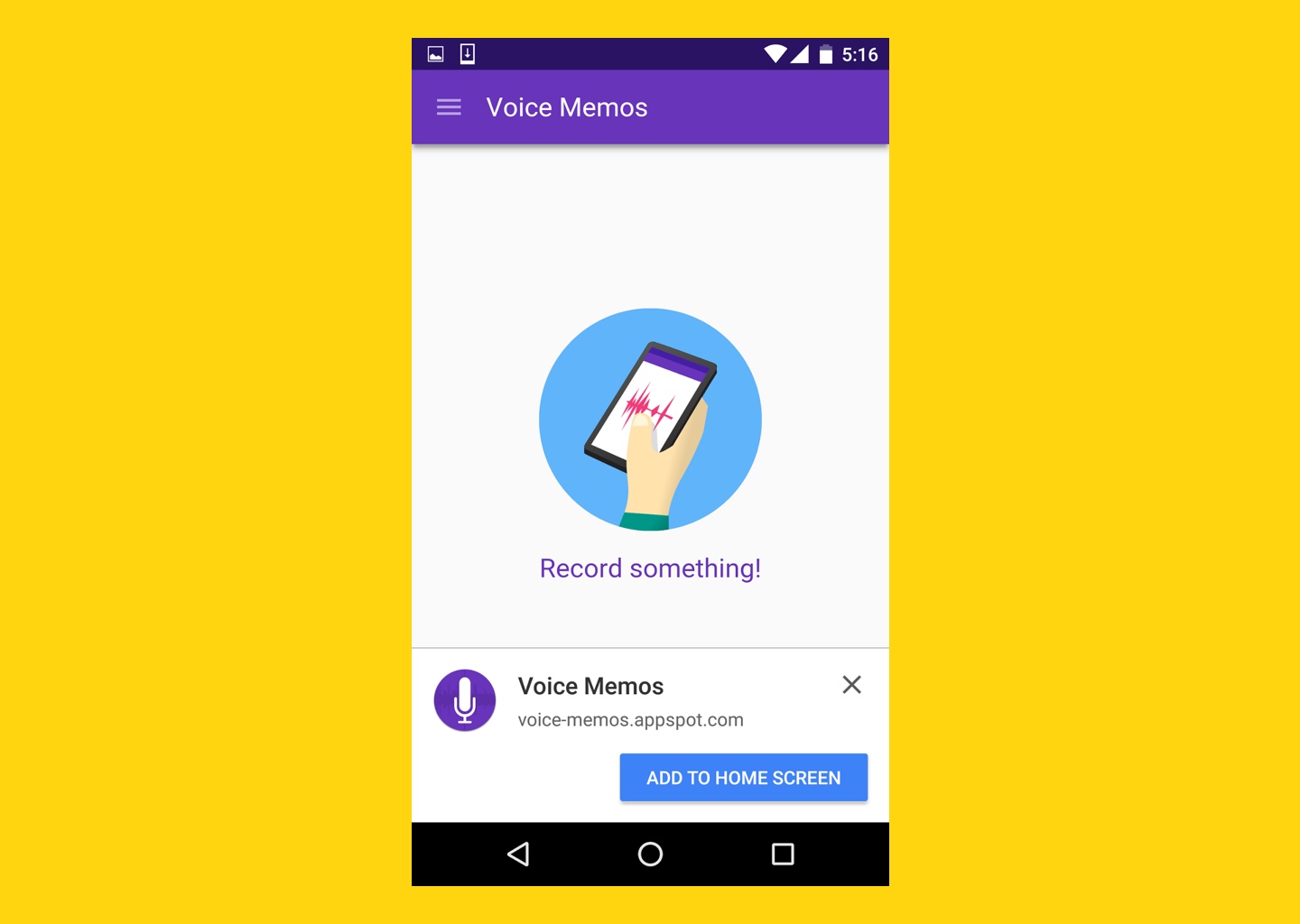 In order for the app install prompts to display your app must:

A service worker is a script that runs in the background, separate from your web page. It responds to events, including network requests made from pages it serves. A service worker has an intentionally short lifetime.

It wakes up when it gets an event and runs only as long as it needs to process it. Service worker allows you to use the Cache API to cache resources and can be used to provide users with an offline experience.

Service workers are powerful for offline caching but they also offer significant performance wins in the form of instant loading for repeat visits to your site or web app. You can cache your application shell so it works offline and populate its content using JavaScript. 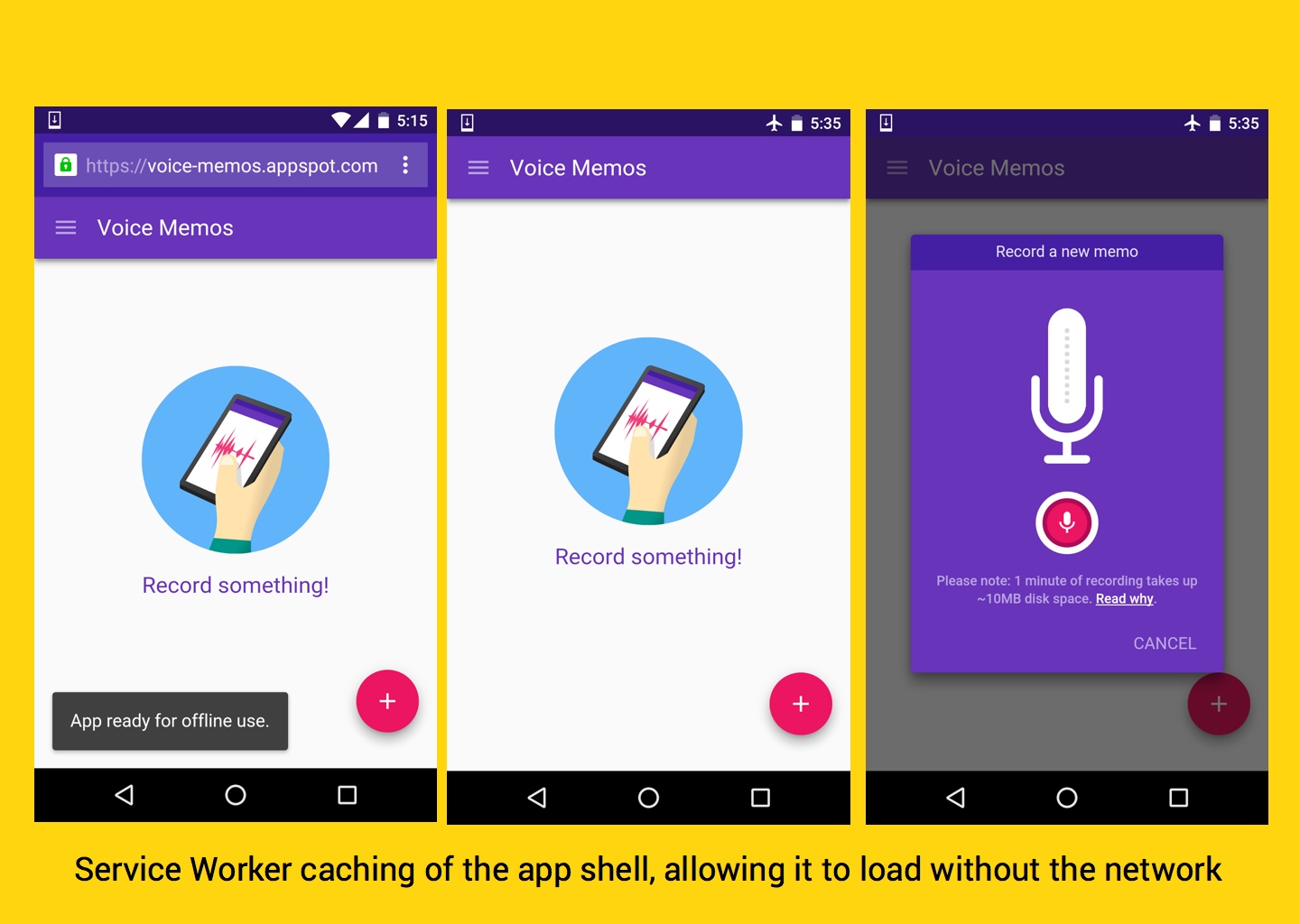 A comprehensive set of service worker samples are available over on Google Chrome samples. Jake Archibald's offline cookbook is a must-read and I highly recommend trying out Paul Kinlan's your first offline web app walkthrough if new to service worker.

Our team also maintain a number of Service Worker helper utilities and build tools that we find useful for reducing the overhead in getting Service Worker setup. They're listed over on Service Worker Libraries. The two main ones are:

Jeff Posnick wrote a quick primer on sw-precache called Offline-first, fast, with the sw-precache module and a codelab on the same tool that you might find useful.

Dean Hume also has a very well written post on getting started with sw-toolbox worth checking out.

Chrome, Opera and Firefox have all implemented support for Service Worker with Edge having positive public signals about interest in the feature. Safari briefly mentioned interest in it via one engineer's proposed five year plan.

Push notifications allow your users to opt-in to timely updates from sites they love and allow you to effectively re-engage them with customized, engaging content.

Effectively, you can build web apps that users can engage with outside of a tab. The browser can be closed and they don't even need to be actively using your web app to engage with your experience. The feature requires both service worker and a Web App manifest, building on some of the features summarised earlier.

The Push API is implemented in Chrome, in development in Firefox and under consideration in Edge. There are no public signals from Safari about their intent to implement this feature just yet. 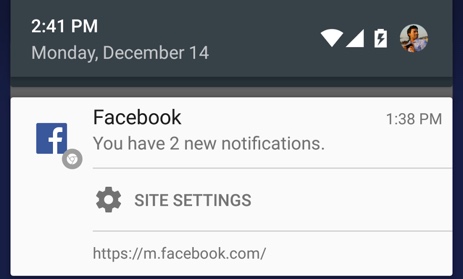 Michael van Ouwerkerk from the Chrome team also has a 6 min intro to Push if you're more video inclined.

Remember, your user experience can have different levels of sweetness depending on the browser being used to view your web app. You're in control of the hard candy shell.

Additional features coming to the web platform such as Background Syncronisation (for data sync with a server even when your web app is closed) and Web Bluetooth (for talking to Bluetooth devices from your web app) can also be layered into your Progressive Web App in this manner.

One-shot Background Sync has been enabled in Chrome and Jake Archibald has a video of his Offline wikipedia app and article demonstrating it in action. Francois Beaufort also has a number of Web Bluetooth samples available if interested in trying out that API.

There's really nothing stopping you from applying any of the above principles to an existing application or framework you're building with. A few other principles worth keeping in mind while building your Progressive Web App are the RAIL user-centric performance model and FLIP based animations.

I'm hopeful that during 2016, we'll see an increasing number of boilerplates and seed projects organically baking in support for Progressive Web Apps as a first-class citizen. Until then, the barrier to adding these features to your own apps isn't very high and are imo, quite worth the effort.

There are different levels of how "all-in" one goes on the Progressive Web App model, but one common approach taken is architecting them around an Application Shell. This is not a hard requirement, but does come with several benefits.

The Application Shell architecture encourages caching your application shell (the User Interface) so it works offline and populate its content using JavaScript. On repeat visits, this allows you to get meaningful pixels on the screen really fast without the network, even if your content eventually comes from there. This comes with significant performance gains. 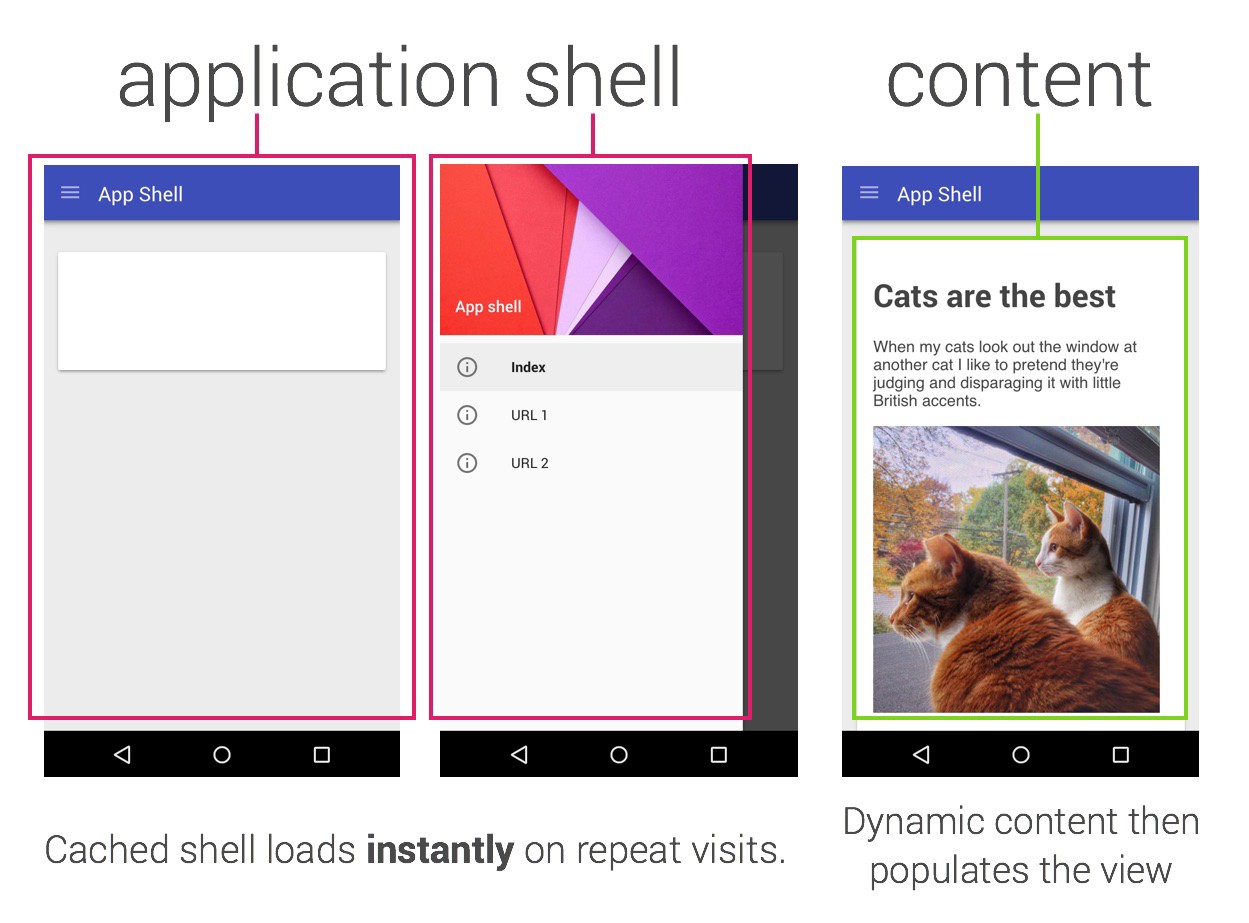 My recommendation is reading our write-up on the architecture and evaluating how similar principles could be best applied to your own application and stack.

The app-shell repository contains a near-complete implementation of the Application Shell architecture. It has a backend written in Express.js and a front-end written in ES2015.

Given that it covers both client and server-side portions of the model and there's quite a lot going on there, it will take some time to familiarise yourself with the codebase. It's otherwise our most comprehensive Progressive Web App starting point right now. Docs will be our next focus for this project. 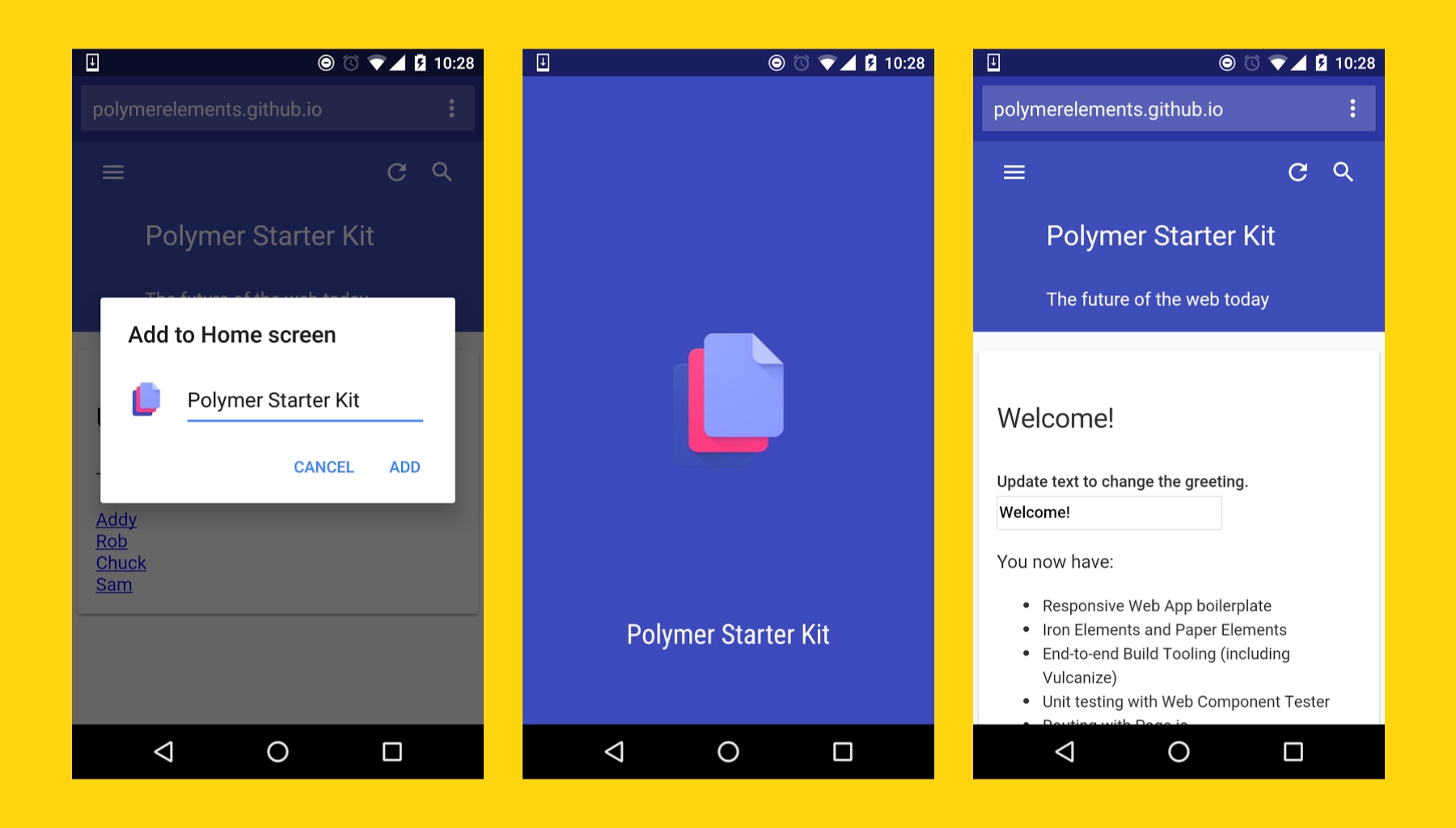 The current version of PSK is missing support for some of the more advanced performance patterns (e.g Application Shell model, async loading) you find in some Progressive Polymer web apps.

We aim to try baking these patterns into PSK in 2016, but early experiments around this can be found in the Polymer Zuperkulblog app by Rob Dodson and the excellent Polymer Perf Patterns talk by Eric Bidelman.

If you have a preference for working with vanilla JS/ES2015 and are unable to use Polymer, Web Starter Kit may prove useful as a reference point you can reuse or steal code snippets from.

Progressive Web Apps with and without frameworks

A number of open-source Progressive Web Apps have already been built by members of the community both with and without JS libraries and frameworks. If you're looking for inspiration, the below repos might prove useful as reference. They're also just pretty damn good apps. 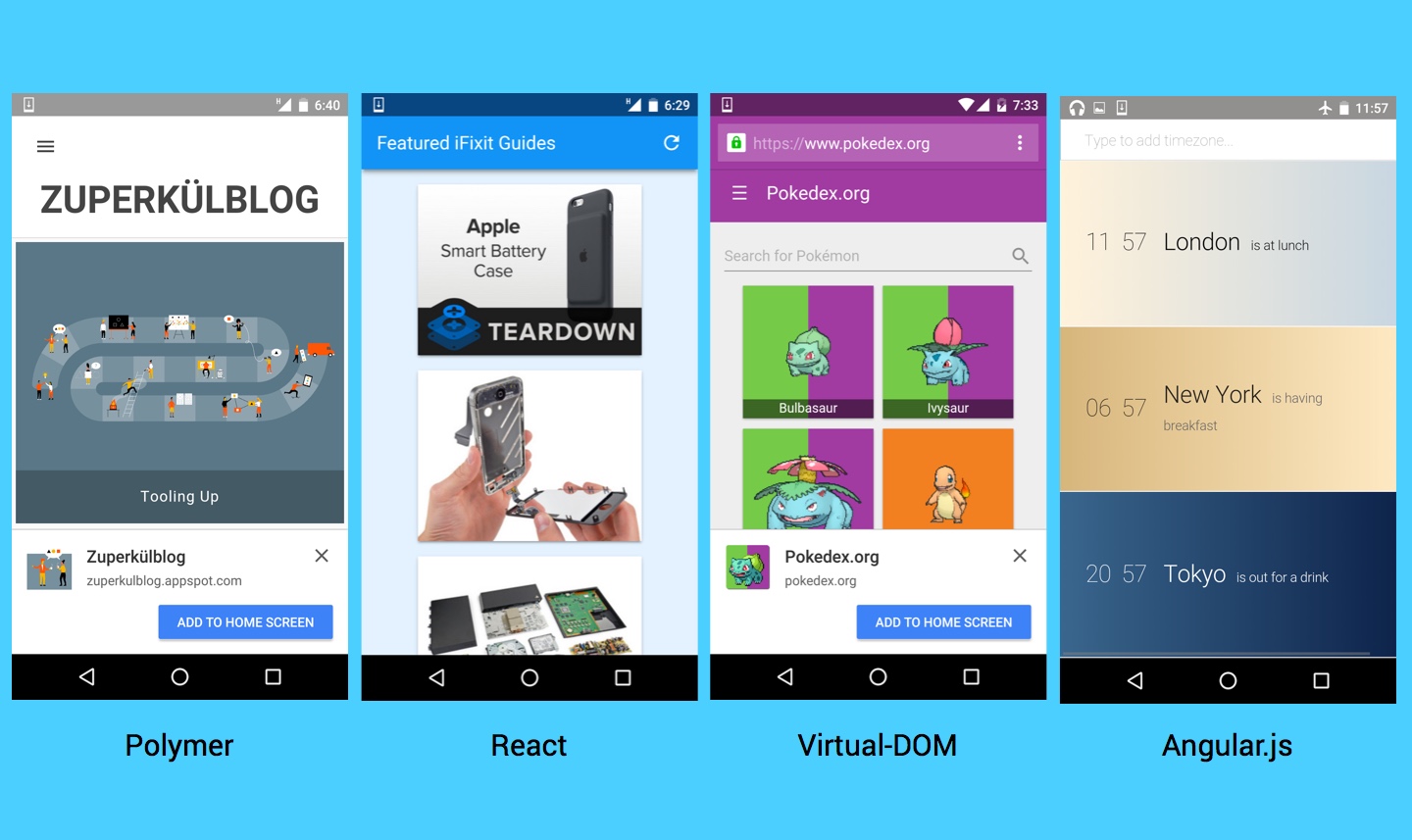 As mentioned, Progressive Web Apps are still in their infancy but it's an exciting time to play around with the methodologies behind them and see how well they can apply to your own web apps.

Paul Kinlan is currently planning out the Web Fundamentals guidance on Progressive Web Apps and if you have input on areas you would like to see covered, please feel free to comment on-thread.