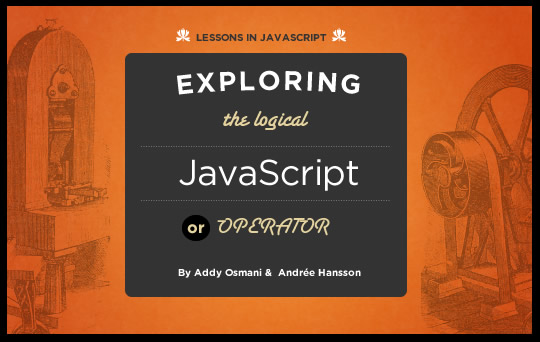 In JavaScript, logical operators are used for boolean logic where a boolean value may be returned depending on the outcome of an expression. With the || (OR) operator, since values don't need to be explicitly true or false (they can be truthy or falsy), the operator can return non-boolean results when evaluated.

To understand the || operator, let's first look at a fairly basic example. The logical OR operator may be used to provide a default value for a defined variable as follows:

In this case, foo will only be assigned the value of foobar if bar is considered falsy. A falsy value could be considered being equal to 0, false, undefined, null, NaN or empty (e.g "").

This pattern might look familiar as if you've written jQuery plugins before or used $.extend(), you'll see it implemented when checking for an options object to either be specified or set to an explicit default value:

Some developers also like using the || operator to set explicit null values when handling falsy values in an application. This helps ensure that values are intentionally nullified:

Commonly, you're unlikely to want null values but when you do, there's a certain comfort in not having to wonder if it's a desired value or if it indeed should be a nullified property or variable.

You may also see developers opting for this approach to default-namespacing, where rather than opting for a two-line statement consisting of namespace = namespace || {} and populating the object later, this is all done at once as follows:

Now, JavaScript variables aren't typed, so a variable may be assigned a value (e.g. a number), despite being assigned through boolean operators:

What's happening here isn't quite magic—the expression is simply being lazily evaluated. The interpreter checks the value of the first part of the statement, null, establishes that it's falsy and continues moving forward until a falsy value isn't found (or if no truthy value is found, returning the last value). It's a neat trick that works in dynamic languages beyond just JavaScript, but won't work in static languages, where a type error will be thrown if you try the above.

If you're interesting in reading up more about the evaluation technique used in this example, check out short-circuit evaluation.

So, where is any of this useful? The OR operator can be applied to functions where we wish to provide a default value (as we've seen earlier) if falsy-ness is incurred as follows:

Although, you're more likely to see a ternary to solve this problem in the wild, or perhaps something similar to this:

You may be wondering why. In my opinion it comes down to two things:

Readability: Some developers feel that if/else is easier to read and it can certainly save time when you don't have to evaluate the expression in your mind while looking through code. I would argue that we still have to do the same with if/else, but it comes down to a matter of preference at the end of the day.

Performance: The developers I've discussed the OR operator with have had a perception that if statements had to be more performant than ||, however I believed they had to be at least equivalent performance-wise.

With the aid of jsPerf, we can test out one example of OR vs IF to find out how they compare:

Performance testing: OR vs IF

As you can tell by the results (http://jsperf.com/or-versus-if/2), both operators perform equally as well with WebKit (most versions of Chrome/Safari) and Opera. In Firefox (4,8) and IE 8 and 9, however, OR actually out-performs if which is very interesting.

That said, these numbers are also extremely high, the number of operations per second is exceeding 100 million, and whichever approach you end up using would probably not impact the performance of your application.

At the end of the day it's still going to come down to whether you feel one or more readable than the other (a discussion parallel with whether or not ternary operators should be used).

Now that we've looked at performance testing, there are a few other tricks that the logical operator can be used for. In the following example if the expression on the left evaluates to true, a positive equality message is logged whilst evaluating to false has the opposite effect.

And just for the curious:

The logical OR operator can also however be used in a number of other places:

Although a specific falsy value hasn't been assigned to either side above, the first object is considered truthy in this case, which is why foo is returned. The second object would be returned if the first was falsy.

Extending the 'default value' concept slightly, it's possible to define functions that either execute specific methods defined within a namespace, or define those methods if they don't exist. This can be done a number of different ways (with optional type-checking), but a basic example could look like:

The || operator could also be used in combination with a ternary to support:

You can try out the above code sample here:http://jsfiddle.net/dY5W9/6/

The above approach to solving this problem should typically not be used in production environments and is only shown for demonstration purposes. There are far simpler (and more readable) ways this problem can be solved.

Finally, here are some further experiments using the OR operator, just in case you're interested in how truthy/falsy/other values are evaluated:

That's it! Whilst || has many potential uses, always remember to factor in readability of your code when opting to use it. If you have any other gotchas, corrections or comments to share, feel free to leave them below and we'll get back to you. Happy coding.