The past year has seen many leaps made to improve developer productivity through better tooling. We're paying increasing attention to our workflow and many of us have spent time optimising our usage of tools like Grunt, Bower, Yeoman and the terminal.

Another important area worth spending time on is your debugging workflow - if you're like me, this starts with the Chrome DevTools. When building an application with a specific framework or language abstraction, there's actually some additional tooling available to you in the form of recent DevTools extensions.

In this post, I'll share a quick summary of the latest developments in this area, ranging from the recent Ember extension Yehuda Katz presented at EmberCamp through to less well known extensions for Backbone and KnockoutJS developers.

Note: Canary DevTools disables icons in the toolbar by default, but I've re-enabled them via the Settings cog to aid with visualisation.

Improve your Ember.js debugging workflow with easy inspection of controllers (just select an element rendered within a context for more information), get insights into models and their attributes, layers, bound computed properties and avoid the need to dig down into the Ember object graph to figure out what is going on. 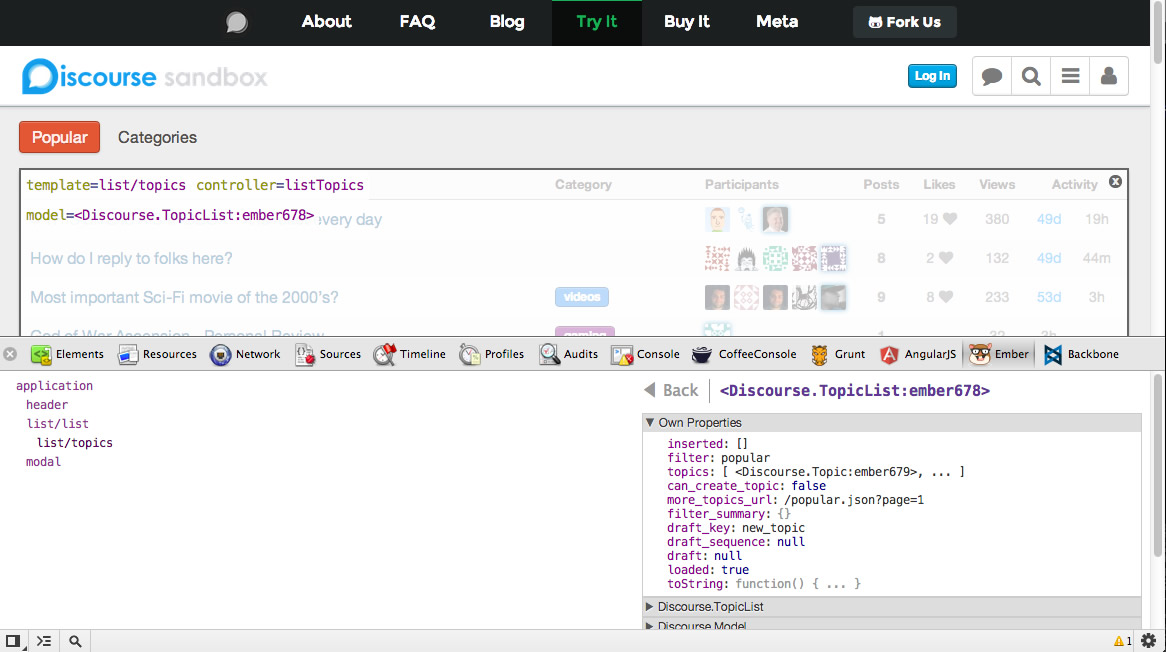 As Backbone.js aims to provide a minimalist baseline for structuring apps, there hasn't been a huge amount of work done on it's tooling in the browser, but this extension for it is pretty neat. Inspect events, syncs, View-DOM bindings and what objects have been instantiated. A useful View hierarchy displayed in the Elements panel and you can also inspect a DOM element and the closest View will be exposed via $view in the console. 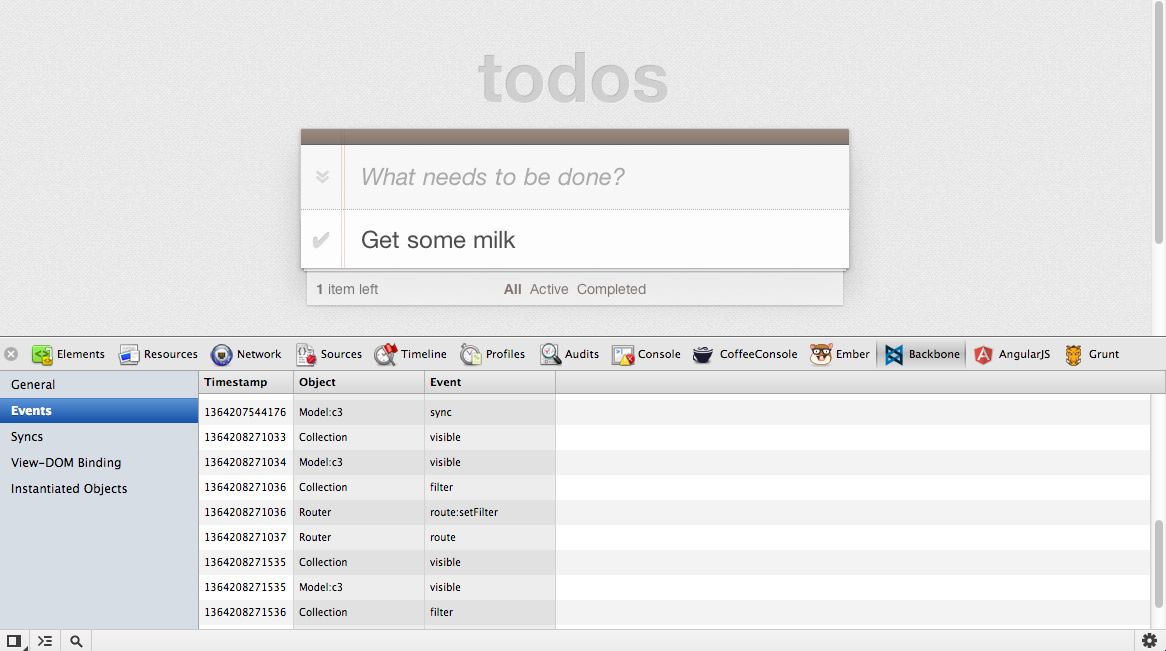 Perhaps the most mature of the extensions listed so far, the Angular team have poured a lot of time and love into Batarang. $scope can get tricky so it's helpful that it helps you inspect nested scopes, view DOM elements associated with a scope, get insights into models - selecting a scope switches to the Elements pane, analyse performance of an app's expressions and visualise dependencies. 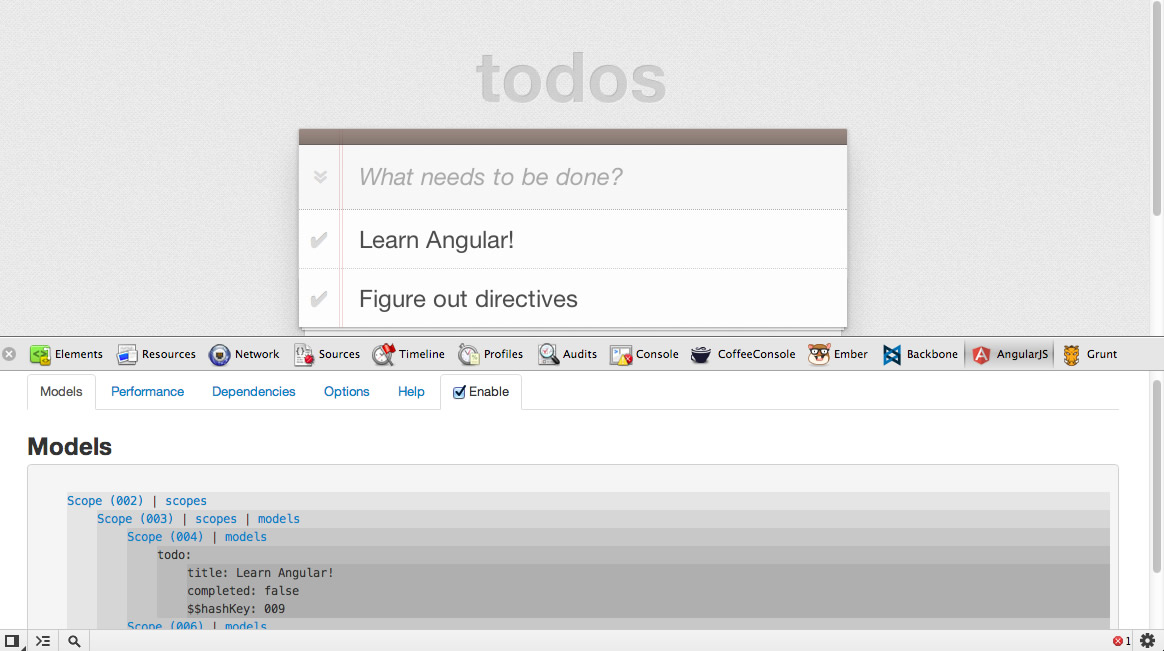 Currently the only DevTools tooling for a Backbone extension library, this tool lets you inspect Thorax projects, Views, Models and Collections via the Elements panel. There's some special setup work required to get it recognizing Thorax projects so make sure to checkout the readme. 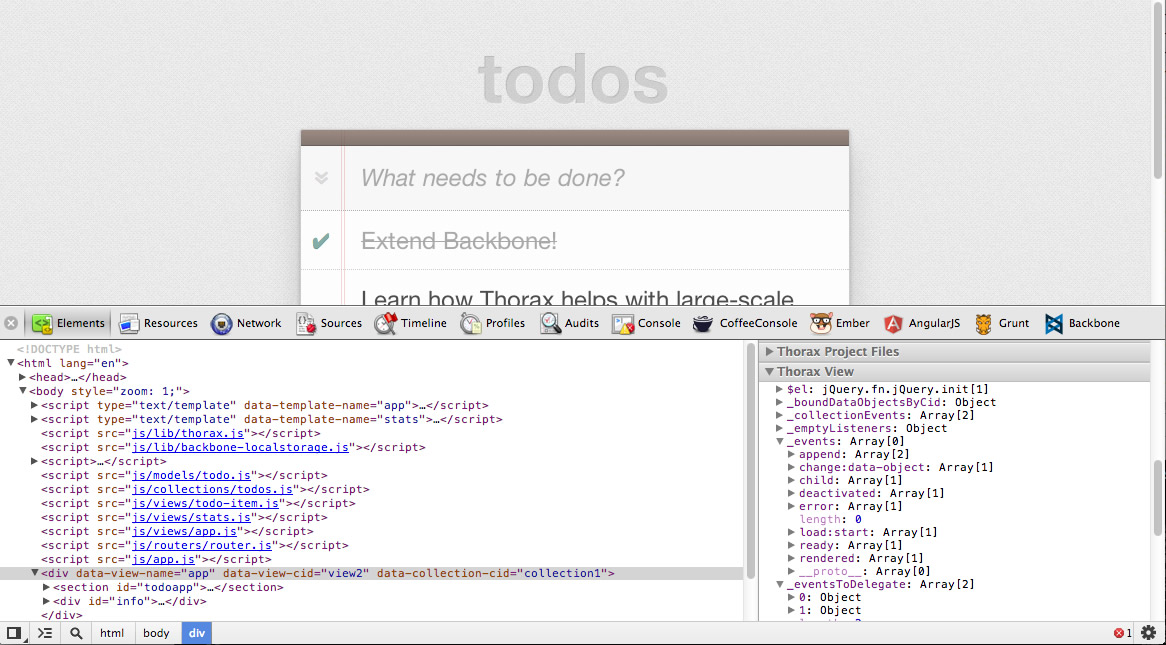 Inspect KnockoutJS context, data for any selected DOM node within the Elements panel. This is pretty useful if you're working on a complex app with many nested ViewModels. 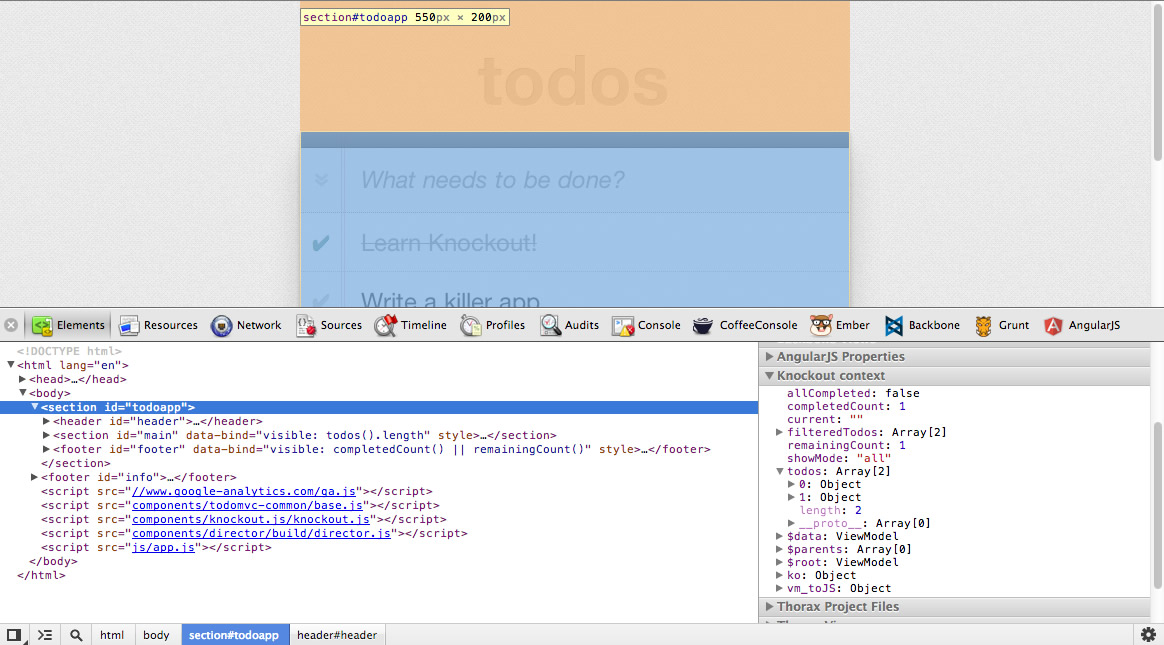 Stop tailing that Rails development.log with RailsPanel. Get insights into view rendering, DB, total request times and more. Note: in order to use this extension you need to add a set meta_request gem to your app's Gemfile. Checkout the readme for more info. 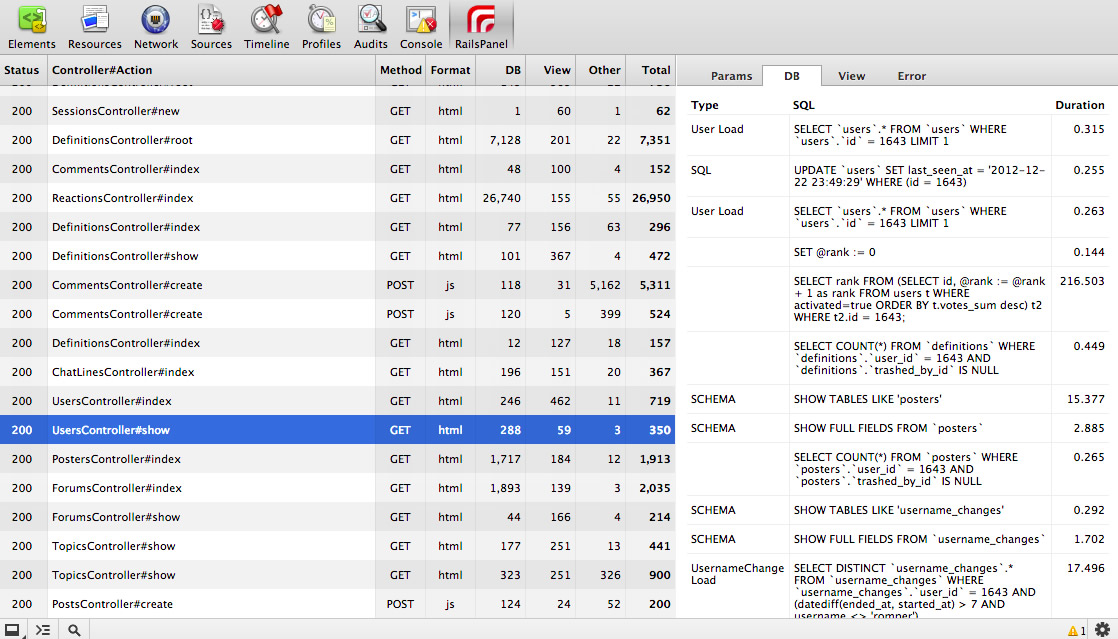 Whilst I don't regularly use CoffeeScript myself, I know a number of friends appreciate this extension. It exposes a console within the DevTools that live compiles CoffeeScript -> JavaScript and runs CS within the context of the current window. 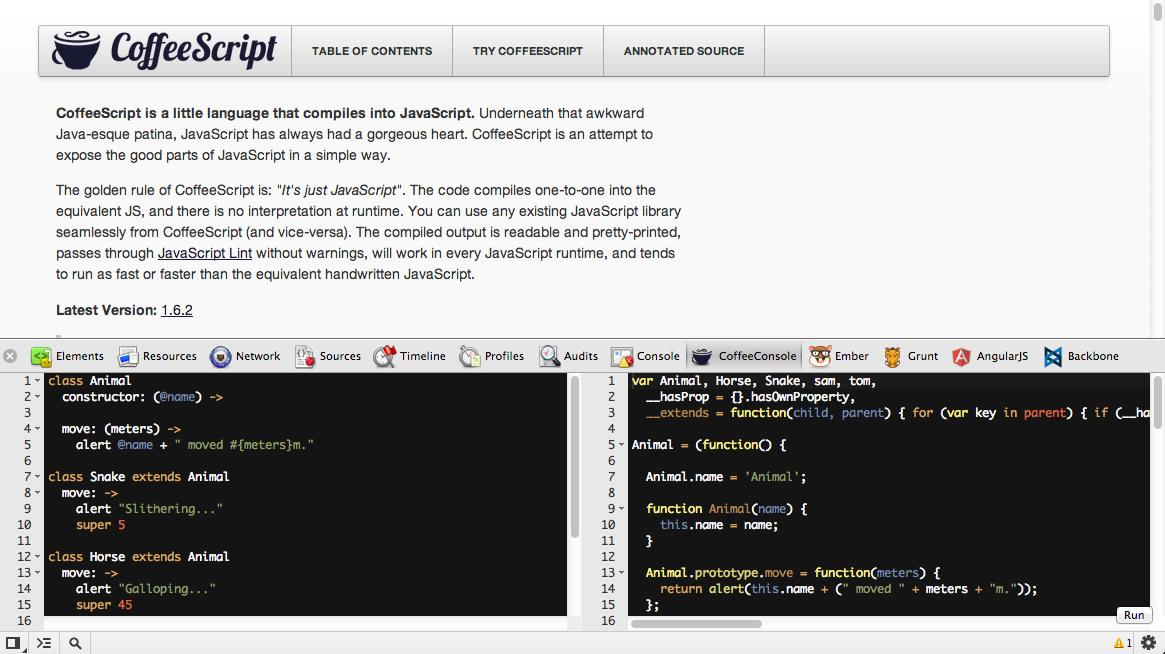 If you hate having to switch back and forth between your browser tools, the terminal and your editor you might appreciate this Grunt task runner extension for triggering Grunt tasks from the DevTools. It's really useful for quickly spinning up a LiveReload/server setup, linting, running tests or pretty much any tasks you have configured for a set Grunt project. Also works well with projects you've scaffolded using Yeoman.

The DevTools now make it easy to save directly back to your source files from the Sources editor. Tincr however supports bi-directional editing meaning if you save changes to a page from an external code editor, your page will be reloaded in Chrome without any manual effort on your part. 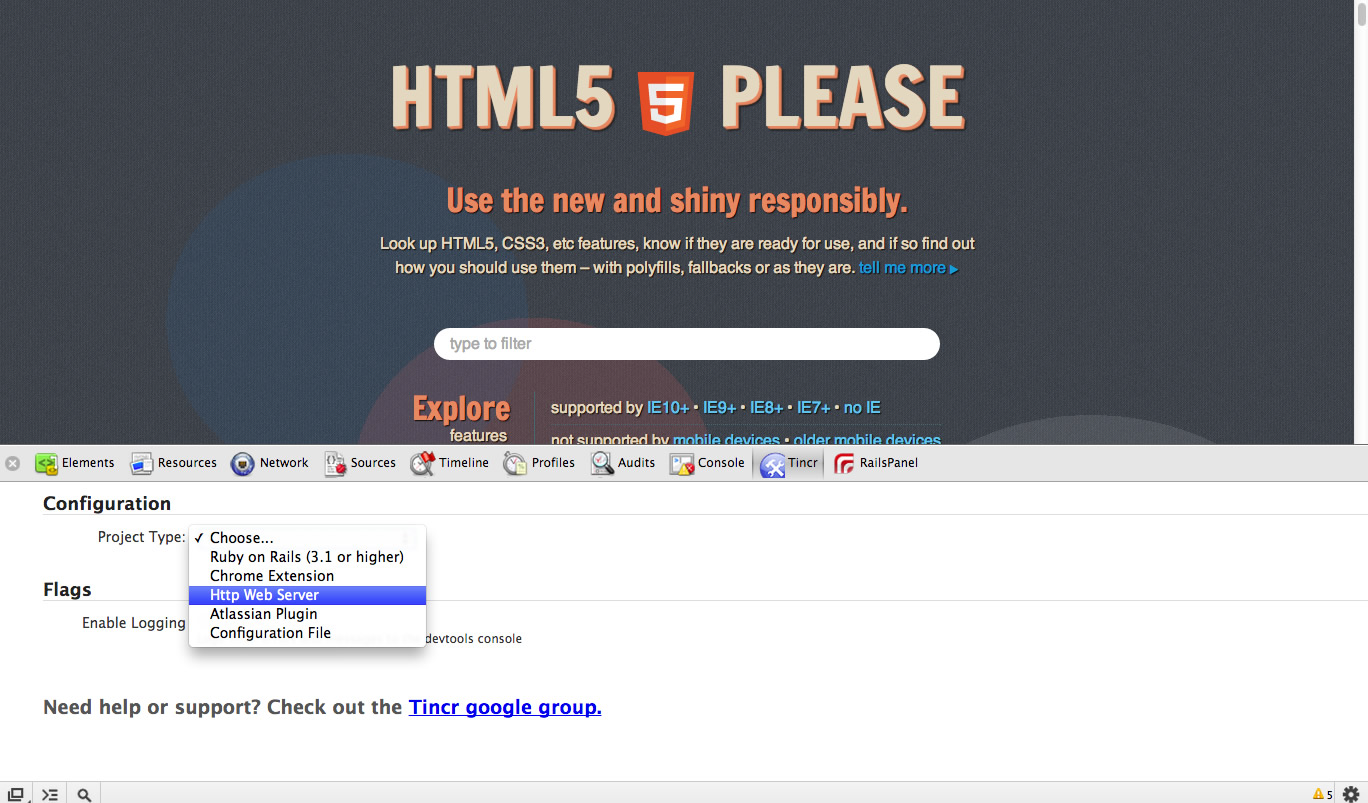 There are simply too many workflow helpers to mention here, but for anyone interested, I also use:

If you're not already using these, I hope you find them useful!.