Team effective models give you a framework to better debug and understand what's working (or isn't) on your team and how you can empower their best work. In this write-up we'll cover one popular team effectiveness framework, The Lencioni Model.

The Lencioni model is a framework for diagnosing and treating dysfunction within an organization. It was first published in 2002 in a book called "The Five Dysfunctions of a Team," by Patrick Lencioni which became a New York Times best seller.

Lencioni used the model to describe five main problems that plague an organization if they are not addressed properly: Trust, Conflict, Commitment, Accountability and Results. A brief video on the model is also available.

The Lencioni model is structured like a pyramid, with trust at the bottom of the pyramid and inattention to results at the top. The other dysfunctions build on top of each other as you go up the pyramid. 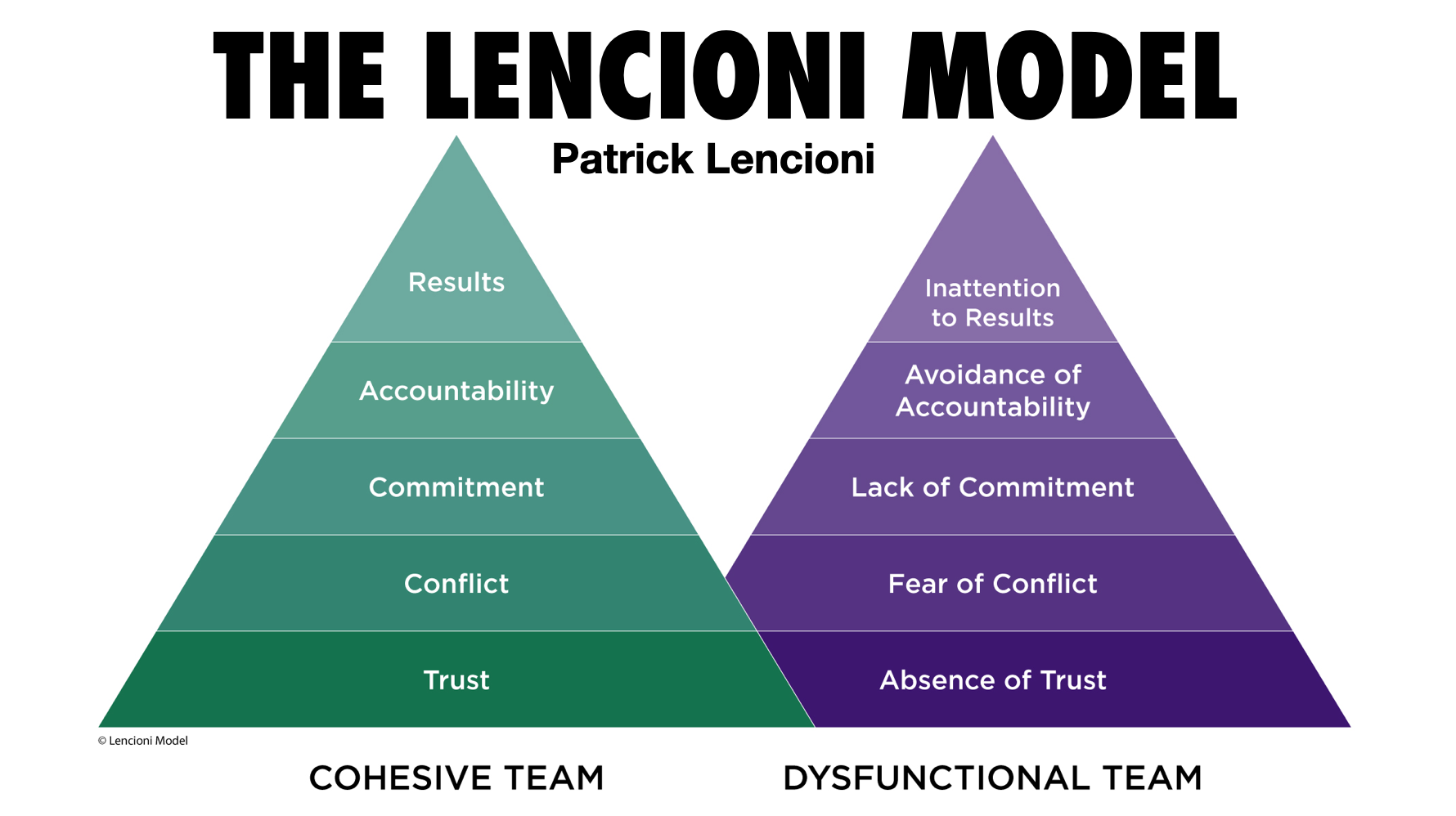 The Five Dysfunctions of a Team are:

If you're a manager, don't rush to fix team dysfunction. Be sure to identify the problem and all of its causes before trying to address it.

When trust is absent among team members, they are unable to be vulnerable with one another or show weakness. As a result, people will not admit mistakes and seek help from others.

When a team lacks trust, its members fear conflict and keep quiet during debates. This results in poorer decisions than if their opinions had been voiced openly.

Fear of conflict leads to indecision and poor cohesion among team members. As a result, there is little commitment to decisions, which creates an environment where ambiguity prevails.

A lack of commitment leads to a breakdown in accountability among team members. If one has not bought into the decision, they will be less likely hold peers accountable for their actions.

If team members don't feel accountable for their actions and goals, they tend to put the needs of individuals above those of the group. This can lead to miscommunication within teams as well as a decline in company performance overall.

Dysfunctions such as power struggles and lack of trust between team members are common in many organizations. According to Lencioni, overcoming the absence of trust requires the team to show vulnerability and the willingness to take risks.

Leadership should acknowledge these dysfunctions, seek to understand their root causes, and then work together with other leaders on a plan for addressing them—that will result in more productive teams.

Here are some simple questions to ask yourself in order to determine the level of dysfunction within your organization:

To be a successful leader, you must model trust and openness. Encourage disagreement in productive ways. Be clear about roles and responsibilities. Set the bar high but realistic—and celebrate when team members surpass those standards!

Pros and Cons of the Lencioni model

The Lencioni model is a great tool for identifying what's going on in your organization. It can also be helpful for pinpointing the root cause of problems that are holding you back from reaching your goals and achieving success.
The Lencioni model is useful for a number of reasons:

The downside to high-performance team models like Lencioni's is that they aren't as prescriptive as they could be. You'll likely need to choose the model you think works best and then tweak it as needed or change your approach entirely down the road. Lencioni's model also relies on the ability of team members to be vulnerable in order to progress toward trust. 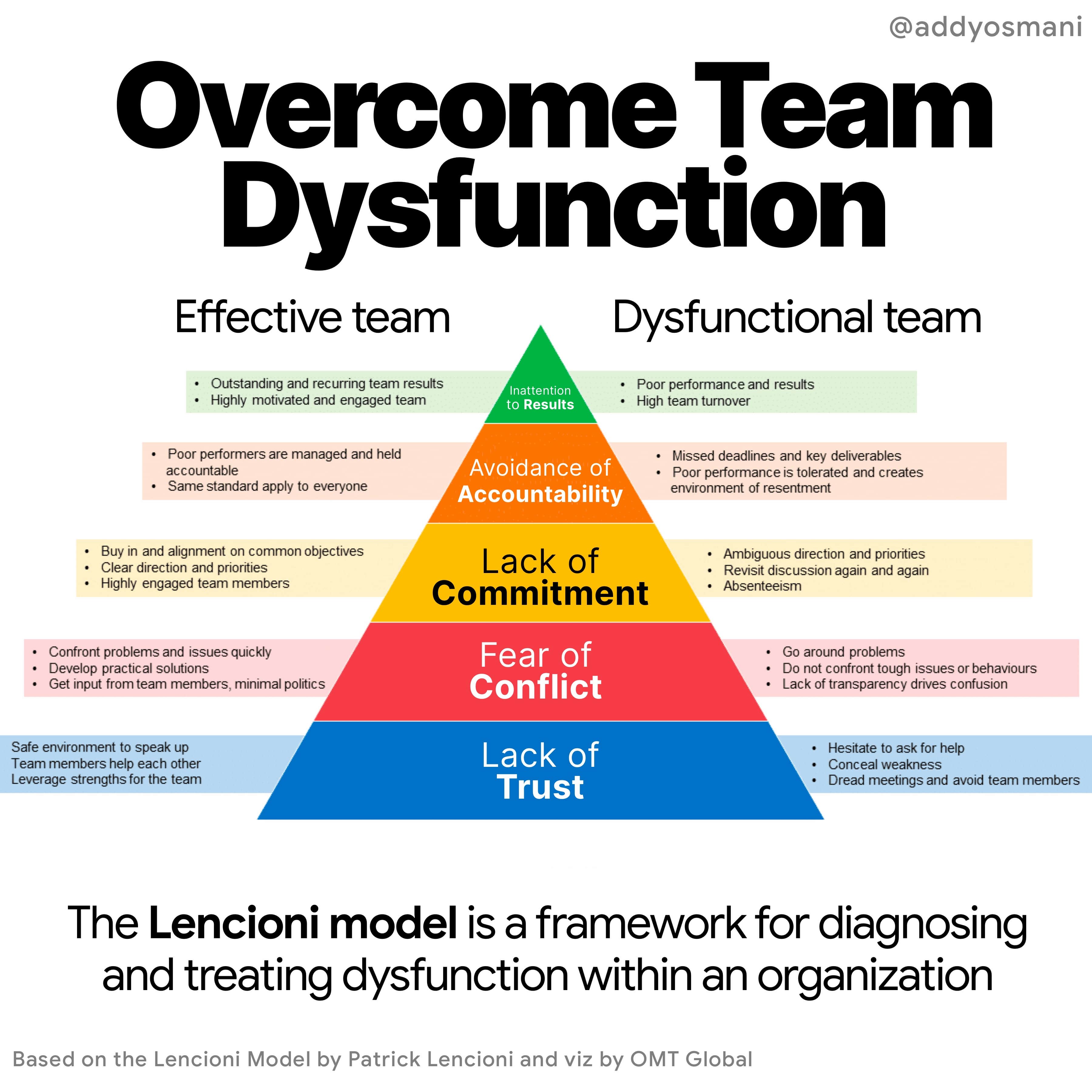 The Lencioni model is a helpful tool for leaders who want to build strong teams. It provides a framework for assessing how your team is functioning and identifying areas where improvement is needed. But it's important not to skip over any steps when working on team dysfunction; instead, take care of all necessary steps so that you can develop a successful team.

Note: If you're interested in learning more from Pat, I am also happy to recommend "The Ideal Team Player" book: in it, Pat makes the case that the key to success in an increasingly team-oriented world is being humble, hungry and smart. He also covers this in his TED talk.