Progressive Web Apps (PWAs) describe how a web app can progressively change with use and user consent to give the user a more native-app-like experience with offline support, push notifications and being installable to the home-screen. They can gain substantial performance benefits thanks to intelligent service worker caching of your UI shell for repeat visits.

This allows you to focus on speed, giving your webapps the same instant loading and regular updates you're used to seeing in native applications. It’s all possible using an Application shell architecture - a companion to this new way of thinking. Any site can take advantage of service workers, but PWAs must have them so it’s a natural fit. 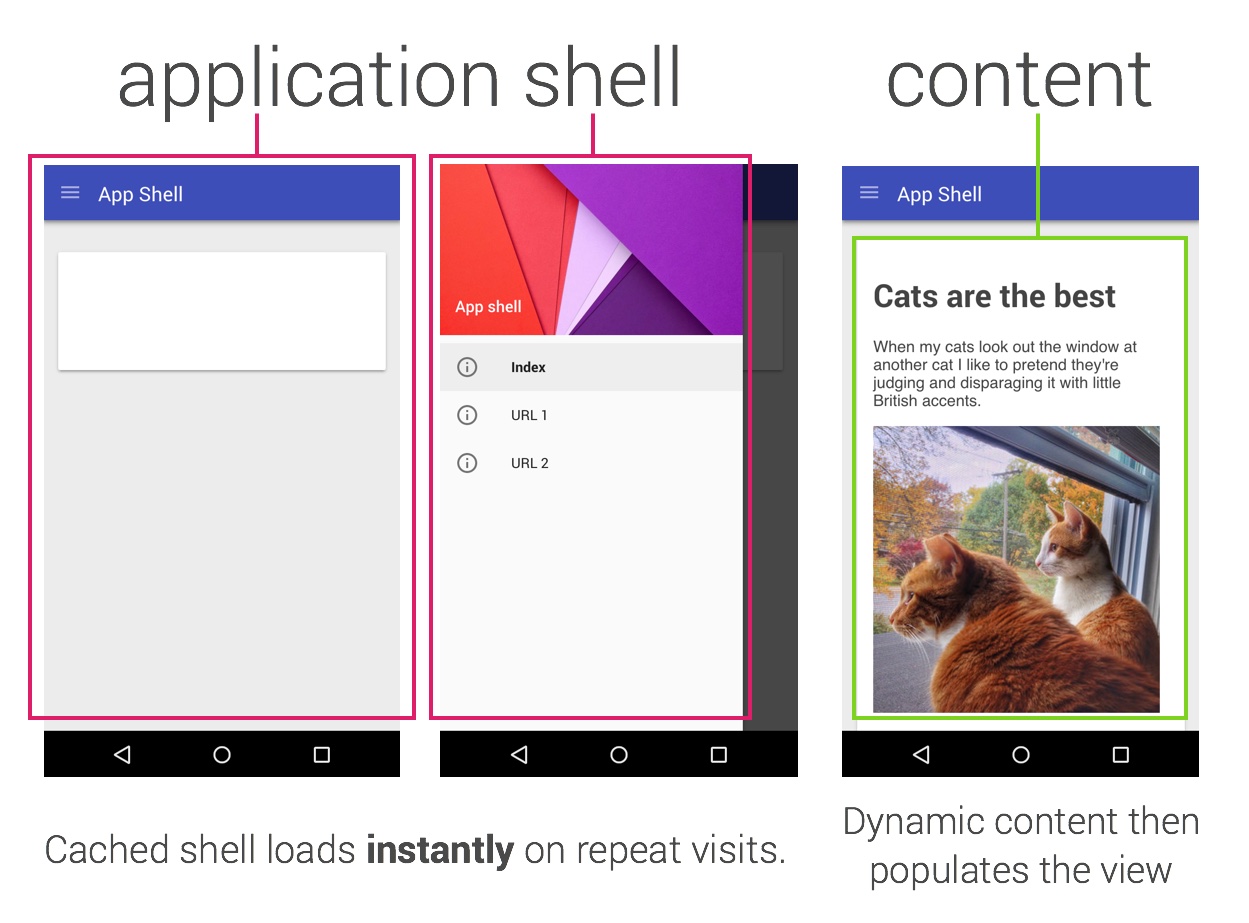 When we talk about an app’s shell, we mean the minimal HTML, CSS and JavaScript powering the user interface. This should load fast, be cached and once loaded, dynamic content can populate your view. It's the secret to reliably good performance. Think of your app's shell like the bundle of code you'd publish to an app store if building a native app - it's the load needed to get off the ground, but might not be the whole story. Keep your UI local and pull in content dynamically through an API.

Let's dive into how to structure your app using a service worker augmented application shell architecture. We'll look at both the client and server-side rendering involved and share an end-to-end sample you can try out today. 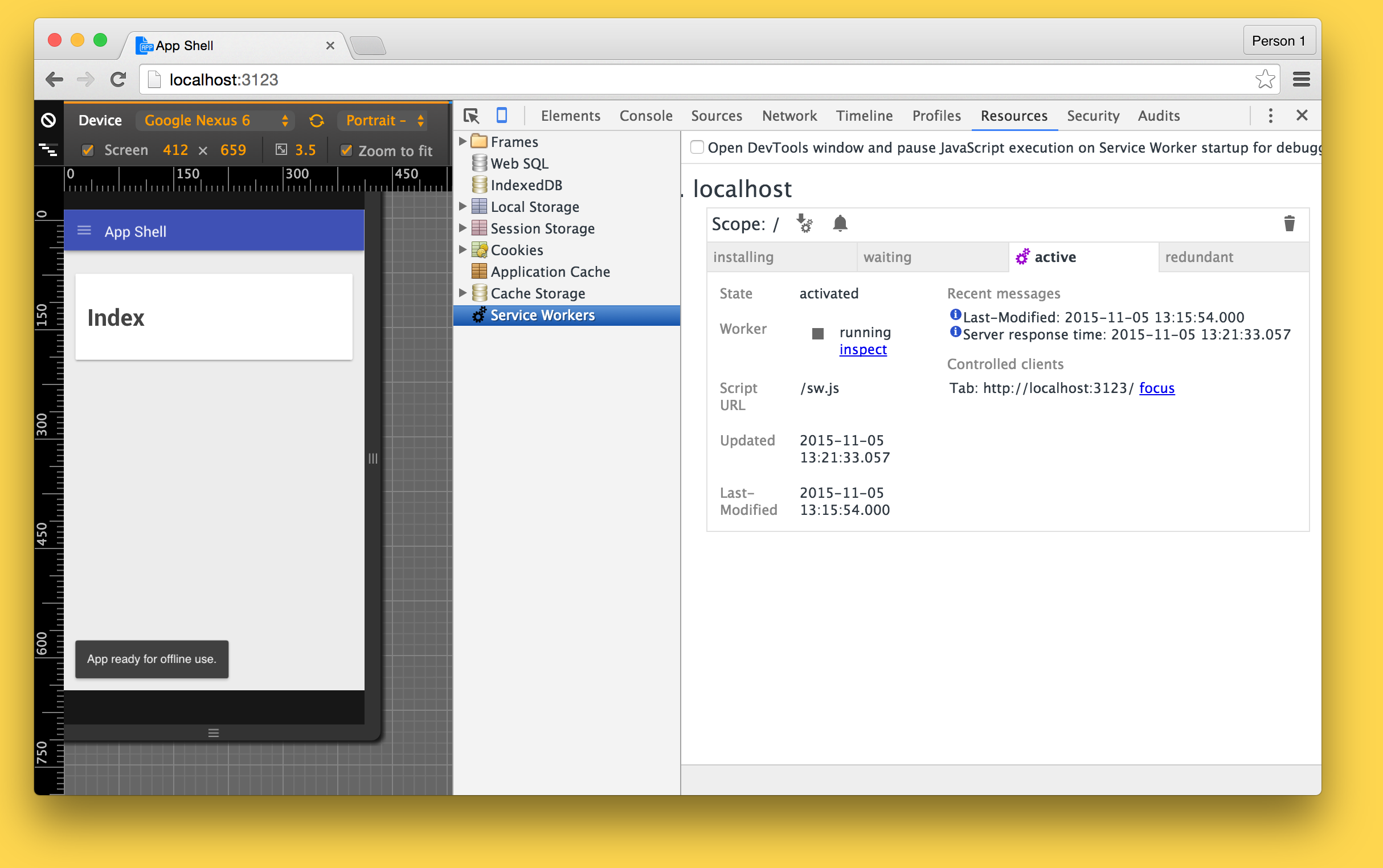 Our application has loaded for the first time and displays an ‘App is ready for offline use’ toast. If an update to the shell becomes available later, we can inform the user to refresh for the new version.

What are Service Workers, again?

A service worker is a script that runs in the background, separate from your web page. It responds to events, including network requests made from pages it serves. A service worker has an intentionally short lifetime. It wakes up when it gets an event and runs only as long as it needs to process it.

Service workers also have a limited set of APIs when compared to JavaScript run from the context of a normal page. This is standard for workers on the web. A Service worker can’t access the DOM but can access things like the Cache Storage API, and they can make network requests using the Fetch API. The IndexedDB API and postMessage() are also available to use for data persistence and messaging between the service worker and pages it controls.

A service worker can intercept network requests made from a page (which triggers a fetch event on the service worker) and returns a response retrieved from the network, or retrieved from a local cache, or even constructed programmatically. Effectively, it's a programmable proxy in the browser. The neat part is that, regardless of where the response comes from, it looks to the web page as though there were no service worker involvement.

To learn more about service workers in depth, read an Introduction to Service Workers.

Service workers are powerful for offline caching but they also offer significant performance wins in the form of instant loading for repeat visits to your site or web app. You can cache your application shell so it works offline and populate its content using JavaScript.

On repeat visits, this allows you to get meaningful pixels on the screen without the network, even if your content eventually comes from there. Think of it as displaying regions of the screen where toolbars and cards will eventually be populated very quickly and then loading in the rest of the content progressively.

What is the performance impact of this architecture?

To test this architecture on real devices, we’ve run our application shell sample on WebPageTest.org and shown the results below.

Testing on Cable with a Nexus 5 using Chrome Dev

The first view of the app has to fetch all the resources from the network and doesn’t achieve a meaningful paint until 1.2 seconds in. Thanks to service worker caching, our repeat visit achieves meaningful paint and fully finishes loading in 0.5 seconds. 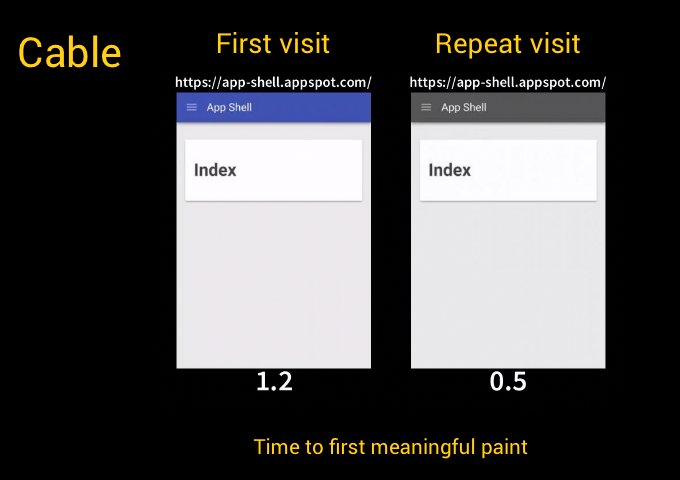 Testing on 3G with a Nexus 5 using Chrome Dev

We can also test our sample with a slightly slower 3G connection. This time it takes 2.5 seconds on first visit for our first meaningful paint. It takes 7.1 seconds to fully load the page. With service worker caching, our repeat visit achieves meaningful paint and fully finishes loading in 0.8 seconds. 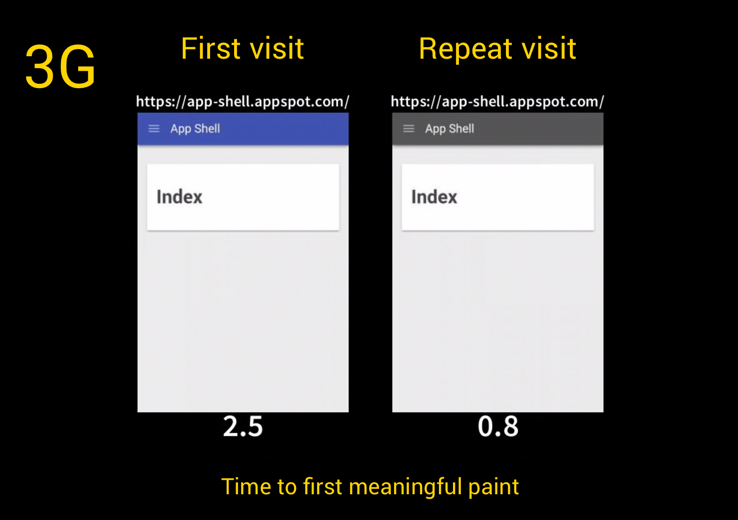 Other views tell a similar story. Compare the 3 seconds it takes to achieve first meaningful paint for our first view of another URL in the application-shell:

to the 0.9 seconds it takes when loaded from our service worker cache. Over 2 seconds of time is saved for our end users.

Similar and reliable performance wins are possible for your own applications using the application shell architecture.

Does service worker require us to rethink how we structure apps?

Service workers imply some subtle changes in application architecture. Rather than squashing all of your application into an HTML string, it can be beneficial to do things XHR-style. This is where you have a shell (always cached and can always boot up without the network) and content which is refreshed regularly and managed separately.

The implications of this split are large. On the first visit you can render content on the server and install the service worker on the client. On subsequent visits you need only request data.

What about Progressive Enhancement?

While service worker isn’t currently supported by all browsers, the application content shell architecture uses progressive enhancement to ensure everyone can access the content. For example, take our sample project. 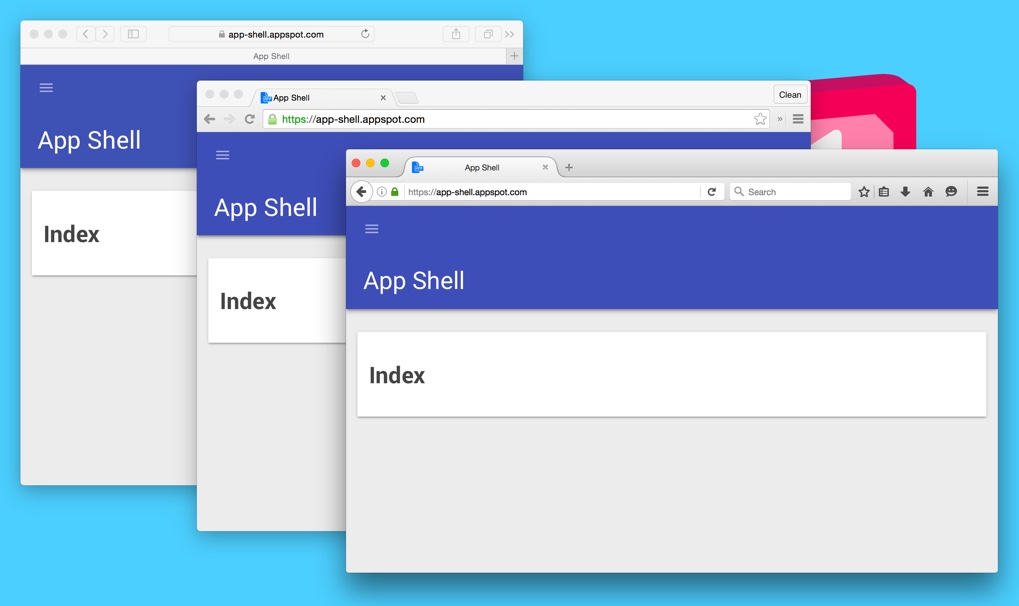 When does it make sense to use this architecture?

The Application Shell architecture makes the most sense for apps and sites that are dynamic. If you're a very small static site, you probably don't need an application shell and can simply cache the whole site in a service worker oninstall step. Use the approach that makes the most sense for your project. A number of JavaScript frameworks already encourage splitting your application logic from the content, making this pattern more straight-forward to apply.

The application shell architecture is possible with just a few changes to your overall application’s UI and has worked well for large-scale sites such as Google’s I/O 2015 Progressive Web App and Google’s Inbox. 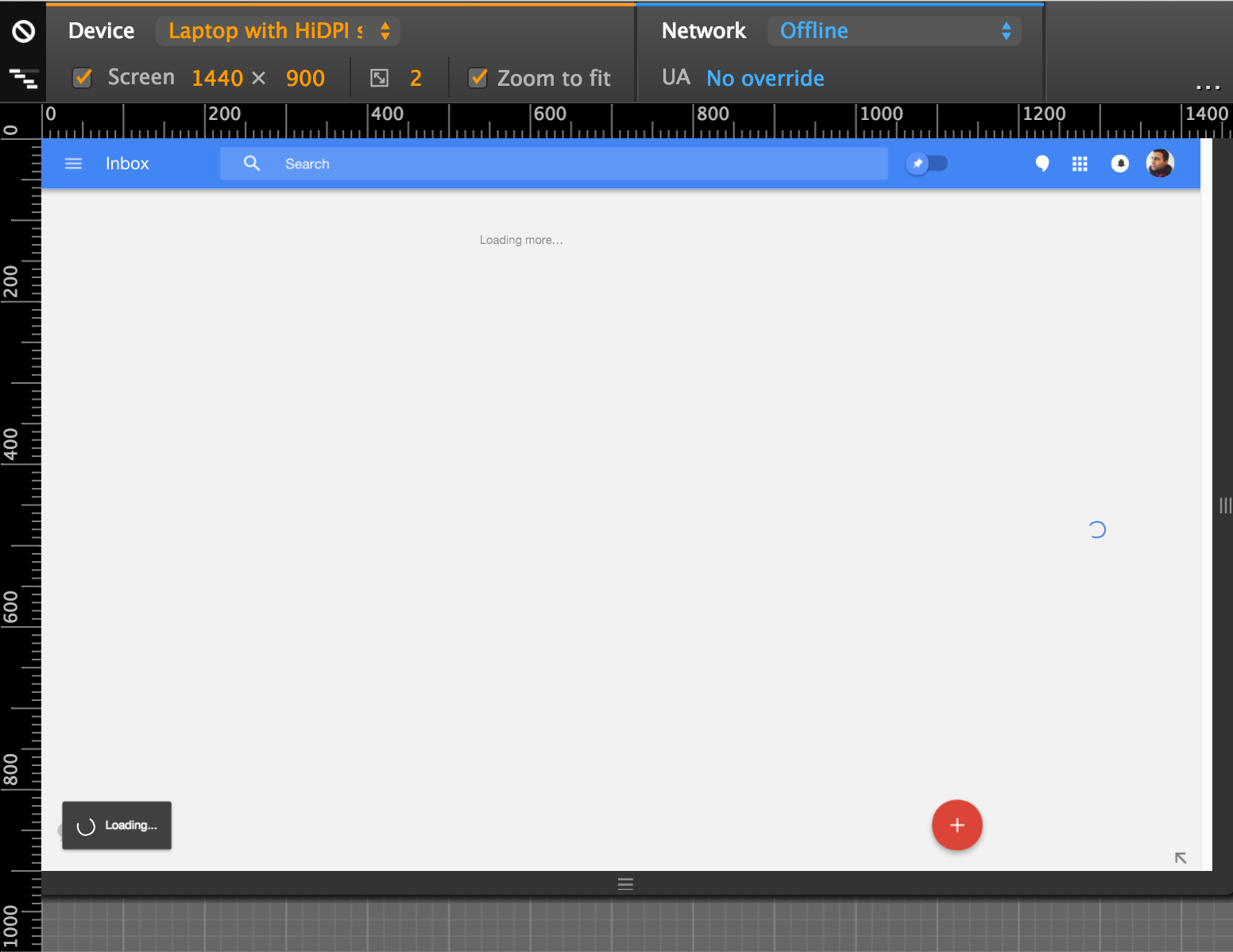 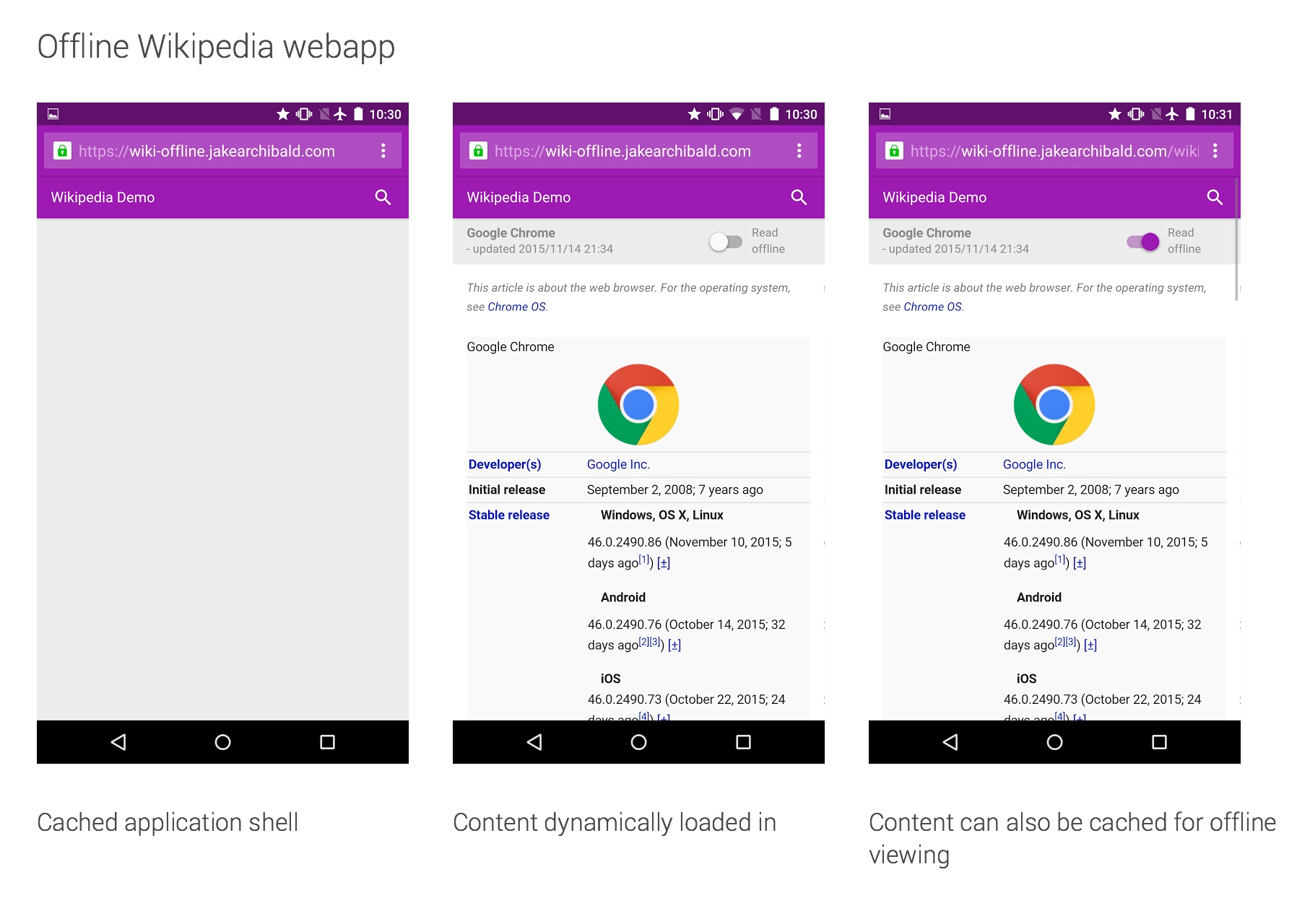 During the first load experience, your goal is to get meaningful content to the user’s screen as quickly as possible. 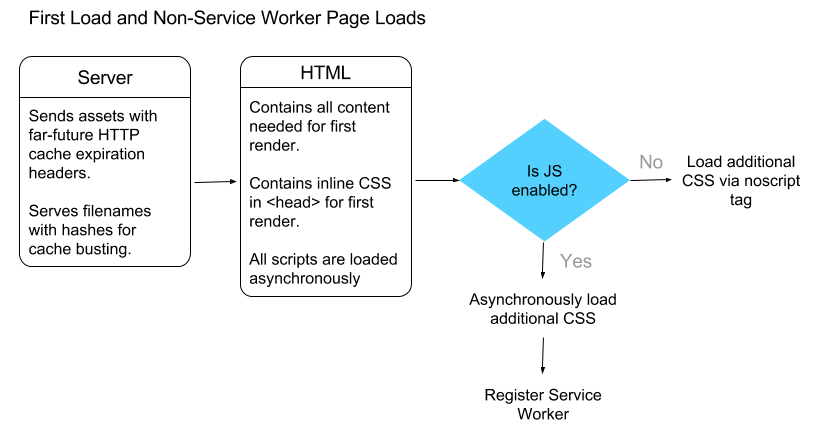 In general the application shell architecture will: 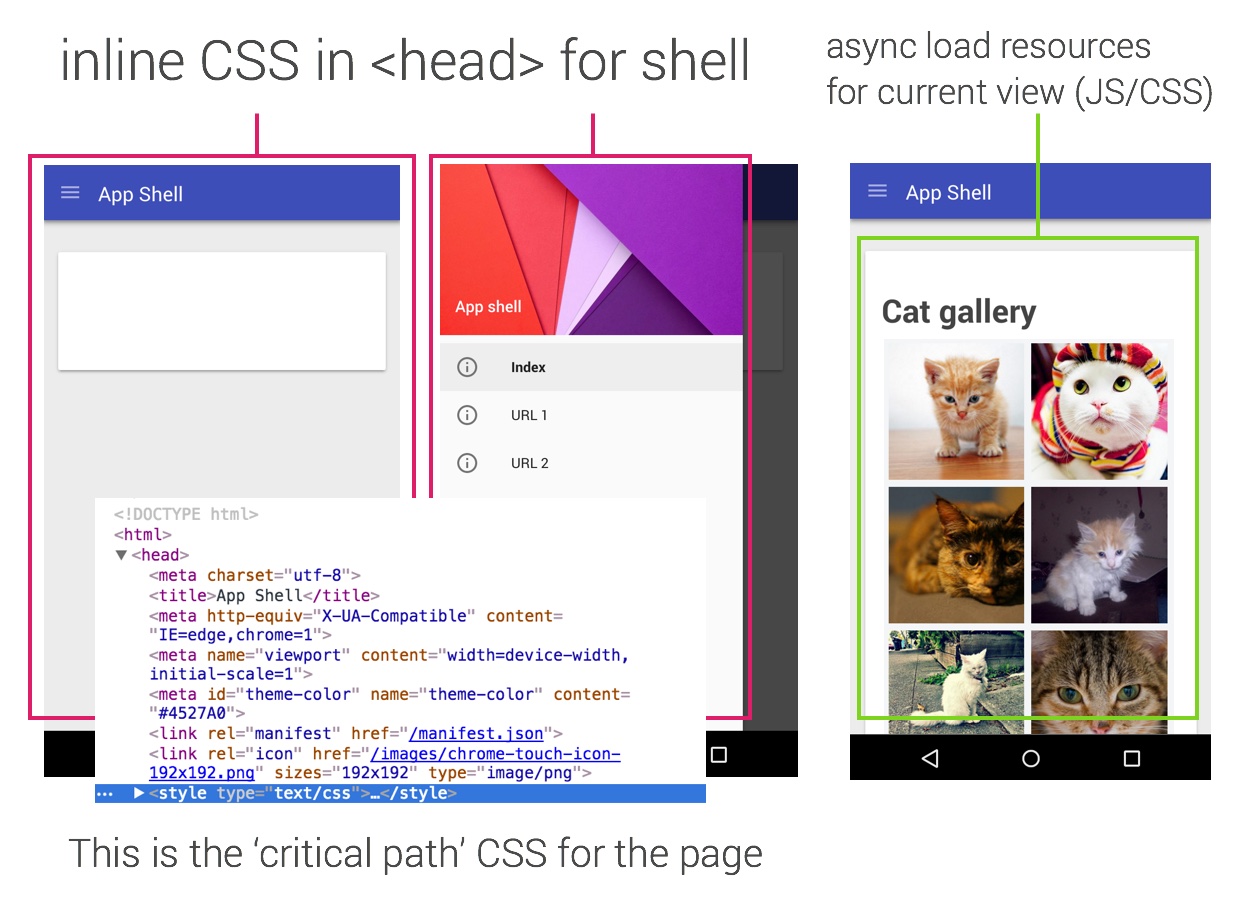 We’ve written a fully working sample using the Application Shell architecture using vanilla ES2015 JavaScript for the client and Express.js for the server. There is course nothing stopping you from using your own stack for either the client or the server portions (e.g PHP, Ruby, Python). We found using JS all the way through relatively painless for this example.

For our application-shell project, we use sw-precache which generates our service worker script and sw-toolbox which handles runtime caching. Together they offer the following service worker lifecycle:

In the architecture, a server side component (in our case, written in Express) should be able to treat the content separate from how it’s presented. Content could be added to a HTML layout that results in a static render of the page, or it could be served up on it’s own to dynamically pulled in.

Understandably, your server-side setup may drastically differ from the one we use for our demo app, but this pattern of web apps is achievable by most server setups, it does require some rearchitecting. We’ve found that the following model works quite well:

One question that arises is how exactly should file versioning/updates be handled. This is application specific and the options are:

Note: The application-shell sample does not (at the time of writing) use file versioning for the assets referenced in the static render, often used for cache busting. We hope to add this in the near future. The service worker is otherwise versioned by sw-precache (covered in the ‘Tooling’ section).

We maintain a number of different service worker helper libraries that make the process of precaching your application’s shell or handling common caching patterns more straight-forward to setup. 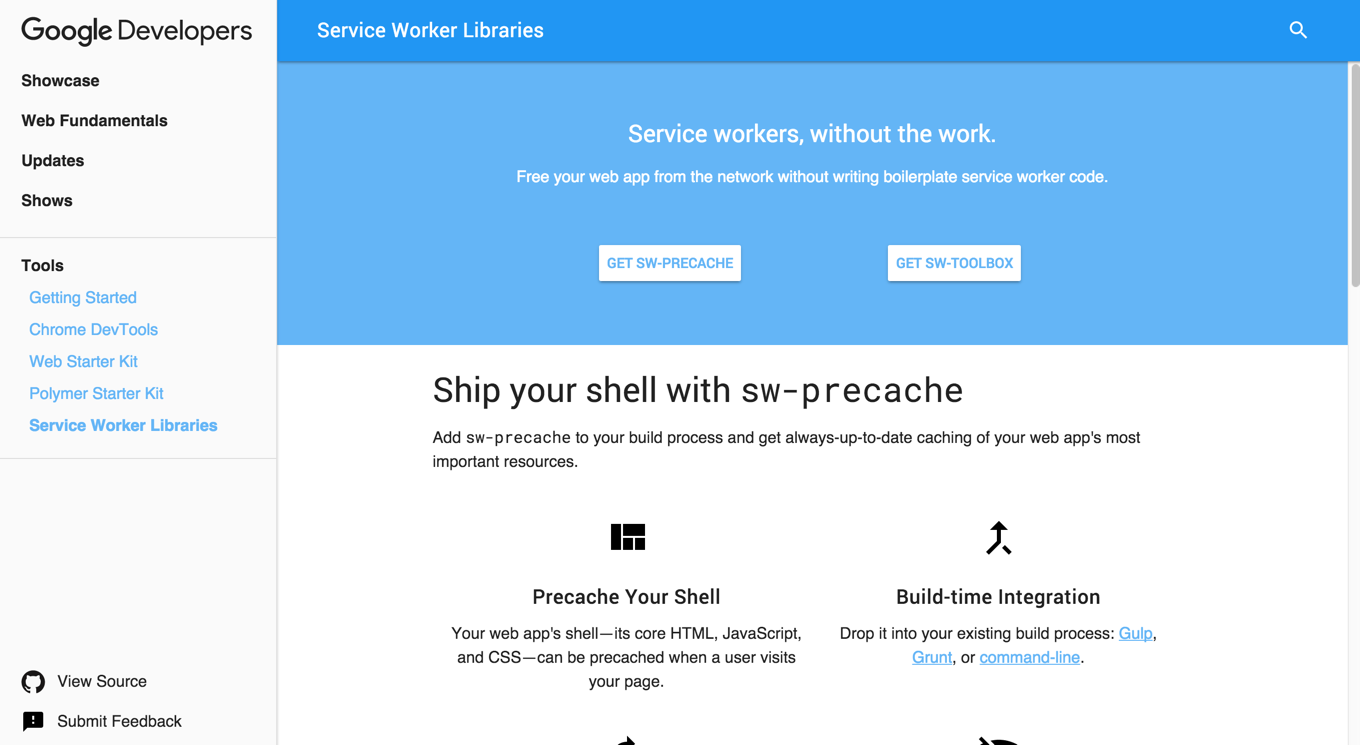 Use sw-precache for your application shell

Using sw-precache to cache the application shell should handle the concerns around file revisions, the install/activate questions, and the fetch scenario for the app shell. You can drop sw-precache into your application’s build process and can use configurable wildcards to pick up your static resources. Rather than manually hand-crafting your service worker script, it generates one for you to take care of cache management in a way that is safe and has an efficient, cache-first fetch handler.

Initial visits to your app trigger precaching of the complete set of needed resources. This is very similar to the experience of installing a native app from an app store. When users return to your app, only updated resources are downloaded. In our demo app, we display an "App updated. Refresh for the new version" message to inform users that a new version of the application shell is available. This pattern is a low-friction way of letting users know they can refresh for the latest version.

Use sw-toolbox for runtime caching

Use sw-toolbox for runtime caching with varying strategies depending on the resource:

Application shell architectures comes with several benefits but only makes sense for some classes of applications.The model is still young and it will be worth evaluating how much effort and overall performance benefits you might gain from using this architecture.

In our experiments, we took advantage of template sharing between the client and server to minimise the work of building two application layers. This ensures progressive enhancement is still a first-class citizen.

If you’re already considering using service workers in your app, take a look at the architecture and evaluate if it makes sense for your own projects.