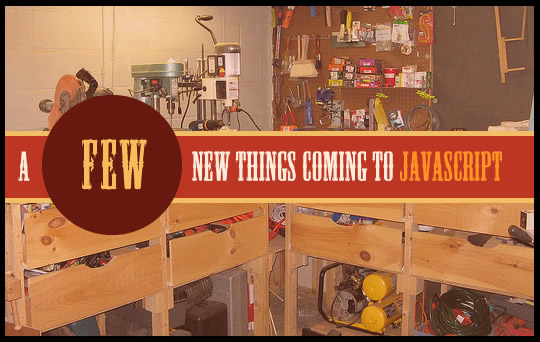 I believe the day-to-day practice of writing JavaScript is going to change dramatically for the better when ECMAScript.next arrives. The coming year is going to be an exciting time for developers as features proposed or finalised for the next versions of the language start to become more widely available.

In this post, I will review some of the features I'm personally looking forward to landing and being used in 2013 and beyond.

Be sure to look at Juriy Zaytsev's ECMAScript 6 compatibility table, Mozilla's ES6 status page as well as the bleeding edge versions of modern browsers (e.g Chrome Canary, Firefox Aurora) to find out what ES.next features are available to play with right now.

In Canary, remember that to enable all of the latest JavaScript experiments you should navigate to chrome:flags and use the 'Enable Experimental JavaScript' option.

Alternatively, many ES.next features can be experimented with using Google's Traceur transpiler (useful unit tests with examples here) and there are shims available for other features via projects such as ES6-Shim and Harmony Collections.

Finally, in Node.js (V8), the --harmony flag activates a number of experimental ES.next features including block scoping, WeakMaps and more.

We're used to separating our code into manageable blocks of functionality. In ES.next, A module is a unit of code contained within a module declaration. It can either be defined inline or within an externally loaded module file. A skeleton inline module for a Car could be written:

module declarations can be used in the following contexts:

An export declaration declares that a local function or variable binding is visible externally to other modules. If familiar with the module pattern, think of this concept as being parallel to the idea of exposing functionality publicly.

Modules import what they wish to use from other modules. Other modules may read the module exports (e.g drive(), miles etc. above) but they cannot modify them. Exports can be renamed as well so their names are different from local names.

Revisiting the export example above, we can now selectively choose what we wish to import when in another module.

We can just import drive():

We can import drive() and miles:

Earlier, we mentioned the concept of a Module Loader API. The module loader allows us to dynamically load in scripts for consumption. Similar to import, we are able to consume anything defined as an export from such modules.

Whilst the above example seems fairly trivial to use, the Loader API is there to provide a way to load modules in controlled contexts and actually supports a number of different configuration options. Loader itself is a system provided instance of the API, but it's possible to create custom loaders using the Loader constructor.

I'm not going to be covering ES.next classes in this post in more, but for those wondering how they relate to modules, Alex Russell has previously shared a pretty readable example of how the two fit in - it's not at all about turning JavaScript into Java.

Classes in ES.next are there to provide a declarative surface for the semantics we're used to (e.g functions, prototypes) so that developer intent is expressed instead of the underlying imperative mechanics.

Here's some ES.next code for defining a widget:

Followed by today's de-sugared approach that ignores the semantic improvements brought by ES.next modules over the module pattern and instead emphasises our reliance of function variants:

All the ES.next version does it makes the code more easy to read. What class means here is function, or at least, one of the things we currently do with functions. If you enjoy JavaScript and like using functions and prototypes, such sugar is nothing to fear in the next version of JavaScript.

Where do these modules fit in with AMD?

If anything, the landscape for modularization and loading of code on the front-end has seen a wealth of hacks, abuse and experimentation, but we've been able to get by so far.

Are ES.next modules a step in the right direction? Perhaps. My own take on them is that reading their specs is one thing and actually using them is another. Playing with the newer module syntax in Harmonizr, Require HM and Traceur, you actually get used to the syntax and semantics very quickly - it feels like using a cleaner module pattern but with access to native loader API for any dynamic module loading required at runtime. That said, the syntax might feel a little too much like Python for some peoples tastes (e.g the import statements).

I'm part of the camp that believe if there's functionality developers are using broadly enough (e.g better modules), the platform (i.e the browser) should be trying to offer some of this natively and I'm not alone in feeling this way. James Burke, who was instrumental in bringing us AMD and RequireJS has previously said:

I want AMD and RequireJS to go away. They solve a real problem, but ideally the language and runtime should have similar capabilities built in. Native support should be able to cover the 80% case of RequireJS usage, to the point that no userland "module loader" library should be needed for those use cases, at least in the browser.

James has however questioned whether ES.next modules are a sufficient solution. He covered some more of his thoughts on ES.next modules back in June in ES6 Modules: Suggestions for improvement and later in Why not AMD? for anyone interested in reading more about how these modules fit in with RequireJS and AMD.

Isaac Schlueter has also previously written up thoughts on where ES6 modules fall short that are worth noting. Try them out yourself using some of the options below and see what you think.

The idea behind Object.observe is that we gain the ability to observe and notify applications of changes made to specific JavaScript objects. Such changes include properties being added, updated, removed or reconfigured.

Property observing is behaviour we commonly find in JavaScript MVC frameworks at at the moment and is an important component of data-binding, found in solutions like AngularJS and Ember.

This is a fundamentally important addition to JS as it could both offer performance improvements over a framework's custom implementations and allow easier observation of plain native objects.

Availability: Object.observe will be available in Chrome Canary behind the "Enable Experimental JS APIs" flag. If you don't feel like getting that setup, you can also checkout this video by Rafael Weinstein discussing the proposal.

Default parameter values allow us to initialize parameters if they are not explicitly supplied. This means that we no longer have to write options = options || {};.

The syntax is modified by allowing an (optional) initialiser after the parameter names:

Only trailing parameters may have default values:

Many of you will already be familiar with the concept of maps as we've been using plain JavaScript objects as them for quite some time. Maps allow us to map a value to a unique key such that we can retrieve the value using the key without the pains of prototype-based inheritance.

With the Maps set() method, new name-value pairs are stored in the map and using get(), the values can be retrieved. Maps also have the following three methods:

As Nicholas has pointed out before, sets won't be new to developers coming from Ruby or Python, but it's a feature thats been missing from JavaScript. Data of any type can be stored in a set, although values can be set only once. They are an effective means of creating ordered list of values that cannot contain duplicates.

One possible use for sets is reducing the complexity of filtering operations. e.g:

This results in O(n) for filtering uniques in an array. Almost all methods of array unique with objects are O(n^2) (credit goes to Brandon Benvie for this suggestion).

The Proxy API will allow us to create objects whose properties may be computed at run-time dynamically. It will also support hooking into other objects for tasks such as logging or auditing.

WeakMaps help developers avoid memory leaks by holding references to their properties weakly, meaning that if a WeakMap is the only object with a reference to another object, the garbage collector may collect the referenced object. This behavior differs from all variable references in ES5.

A key property of Weak Maps is the inability to enumerate their keys.

So again, the main difference between WeakMaps and Maps is that WeakMaps are not enumerable.

Introduces a function for comparison called Object.is. The main difference between === and Object.is are the way NaNs and (negative) zeroes are treated. A NaN is equal to another NaN and negative zeroes are not equal from other positive zeroes.

Array.from: Converts a single argument that is an array-like object or list (eg. arguments, NodeList, DOMTokenList (used by classList), NamedNodeMap (used by attributes property)) into a new Array() and returns it;

ES.next is shaping up to potentially include solutions for what many of us consider are missing from JavaScript at the moment. Whilst ES6 is targeting a 2013 spec release, browsers are already implementing individual features and it's only a matter of time before their availability is widespread.

In the meantime, we can use (some) modern browsers, transpilers, shims and in some cases custom builds to experiment with features before ES6 is fully here.

For more examples and up to date information, feel free to checkout the TC39 Codex Wiki (which was a great reference when putting together this post) maintained by Dave Herman and others. It contains summaries of all features currently being targeted for the next version of JavaScript.

Exciting times are most definitely ahead.