PRPL is a pattern for structuring and serving web applications and Progressive Web Apps (PWAs) with an emphasis on improved app delivery and launch performance. The letters describe a set of ordered steps for fast, reliable, efficient loading:

Note: The PRPL pattern was first introduced by the Polymer team in 2016, but has demonstrated itself applicable to many other stacks.

The server and Service Worker together work to precache the resources for the inactive routes. When the user switches routes, the app lazy-loads any required resources that haven't been cached yet, and creates the required views.

Twitter.com has used the PRPL pattern in production since 2017. Below we can see their use use of granular code-splitting for critical scripts and <link rel=preload> to push them so that they are available as early as possible: 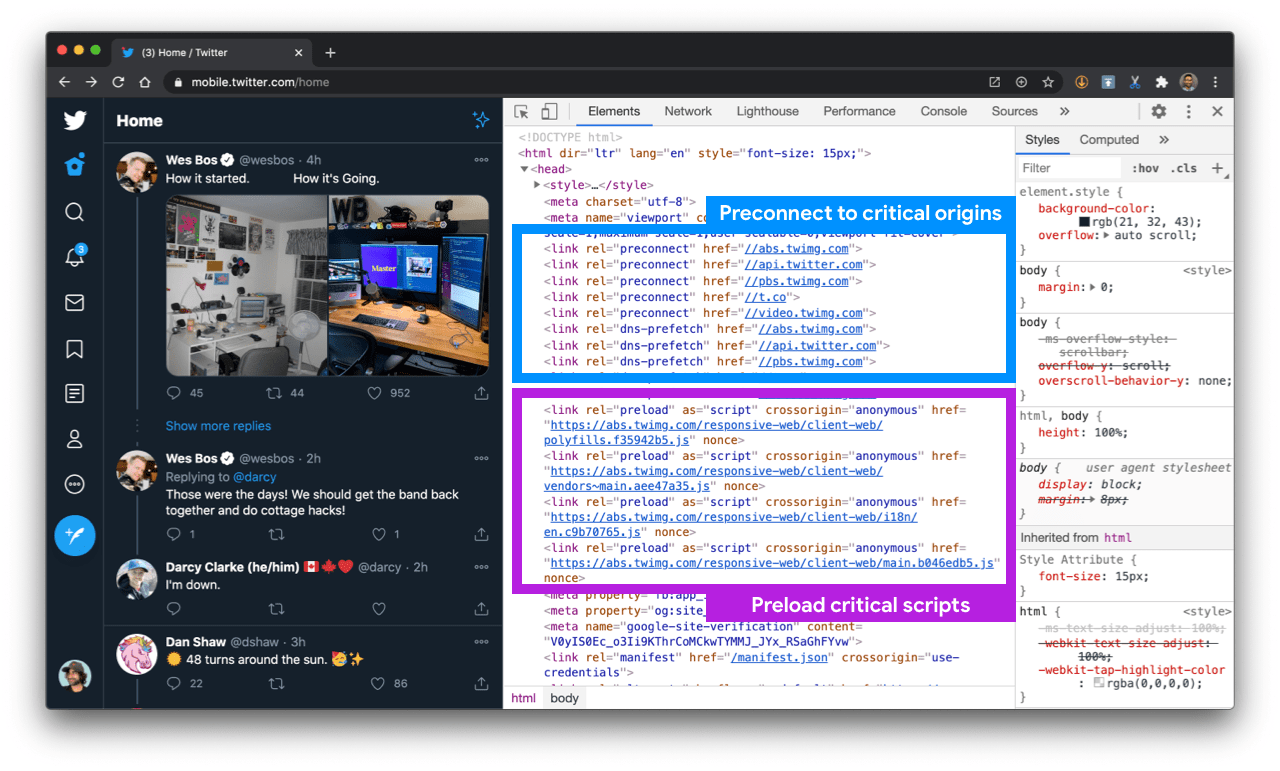 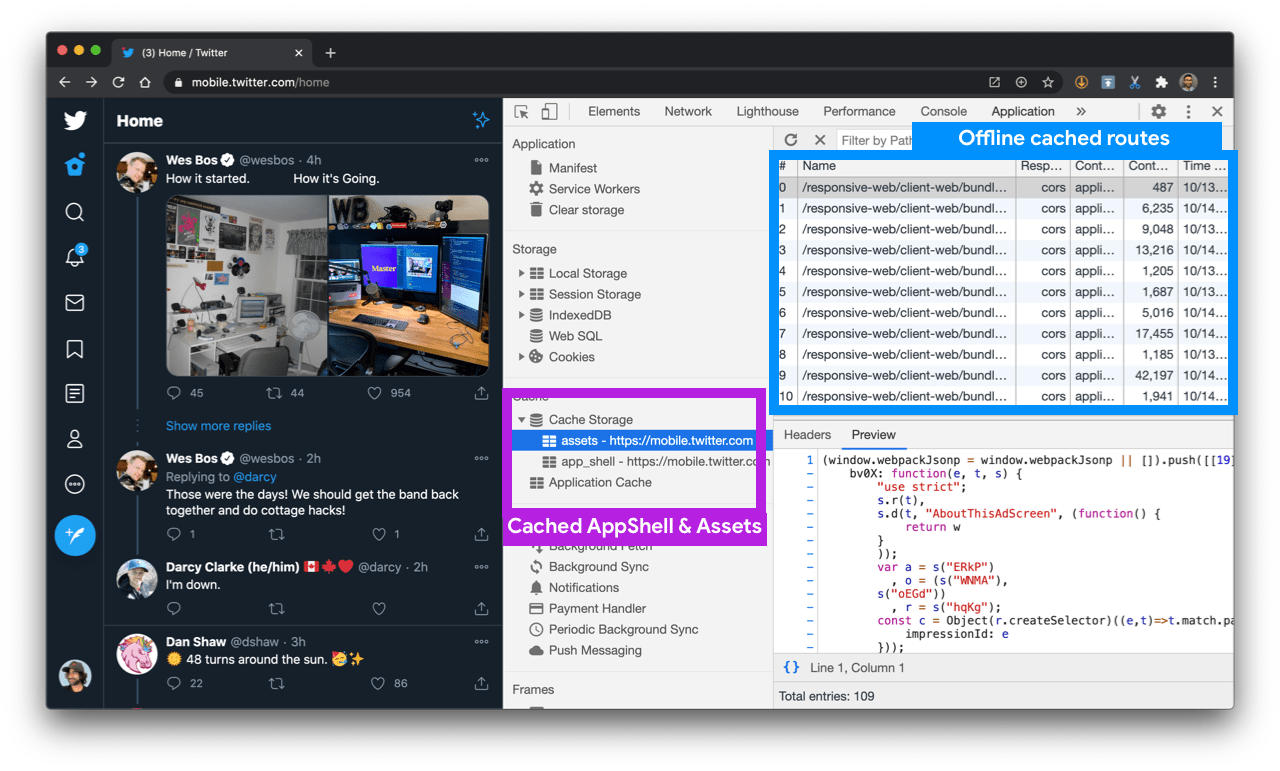 Their application shell (skeleton UI) is also offline cached, instantly loading even when users load the site on a slow or spotty network connection: 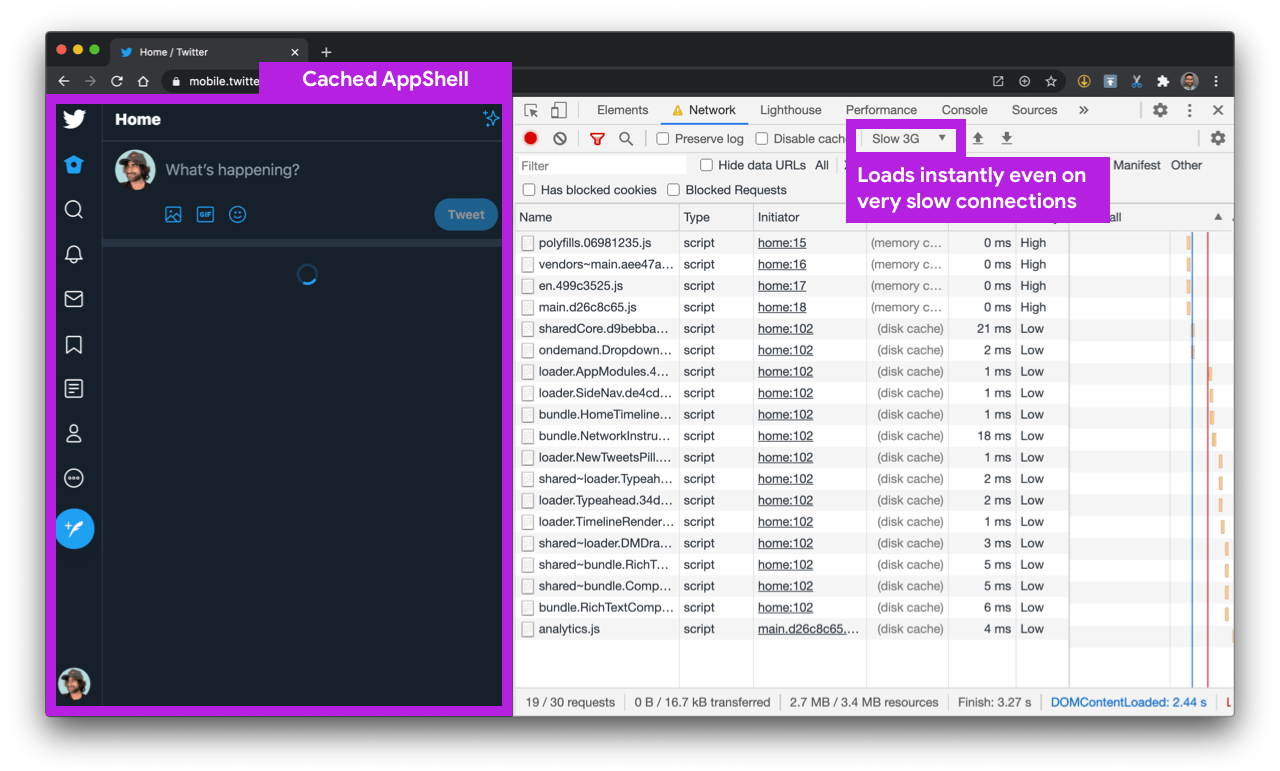 Apps built using PRPL strive to be reliable, fast and engaging. Beyond these basic goals, PRPL aims to:

This is a useful mindset because today’s typical app is far heavier than it needs to be. To help deliver better experiences on the mobile web, we need to start by making apps lighter overall. This implies understanding and carefully considering the weight of everything we include – both our own code and our dependencies.

But that’s not enough. We’re also delivering our apps in an inefficient fashion, typically serving an all-in-one bundle containing an app’s full set of resources. This bundle must be received and processed on the client in its entirety before the user can do anything. Going forward, we need to structure and serve our apps such that:

What technologies does PRPL prescribe?

PRPL is a conceptual pattern that might be implemented in various ways, but it is most easily and effectively realized by utilizing some combination of the following modern web features:

How do you implement the PRPL pattern?

A big part of PRPL is turning the JS bundling mindset upside down and delivering resources as close to the granularity in which they are authored as possible (at least in terms of functionally independent modules). How do you achieve granularity?

Route-based or component-based code-splitting and lazy-loading

You're already writing things as components. Maybe you're using ES modules. For Webpack, we use dynamic import and code-splitting to split your codebase into chunks that are loaded on demand.

For the push/preload portion of PRPL, Webpack also supports preload as a magic comment for preloading critical scripts.

Pre-caching your remaining routes can be achieved using service workers. It’s not uncommon to leverage a service worker library such as Workbox to simplify the process of precaching routes and chunks for your application.

What application structure does PRPL use? 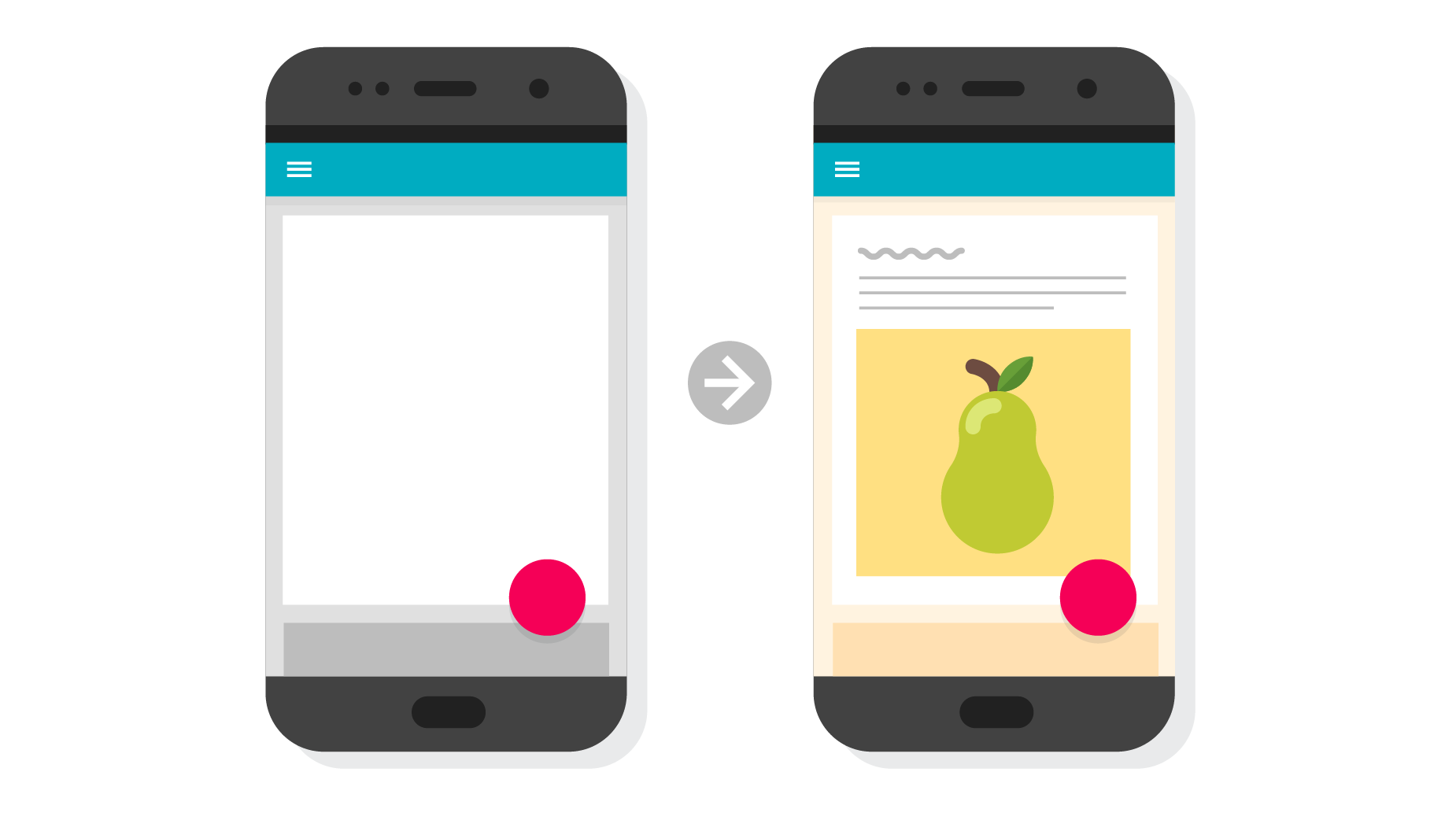 The app should call dynamic import to lazy-load fragments as they're required. For example, when the user changes to a new route, it imports the fragment(s) associated with that route. This may initiate a new request to the server, or simply load the resource from the cache.

Beyond targeting the fundamental goals and standards of PWAs, PRPL strives to optimize for:

PRPL is a pattern that has been used at scale since its introduction in 2016 and continues to be a worthwhile approach to loading worth considering for your app.

Credit to Gray Norton, Kevin Schaaf, Alex Russell and many others for their contributions to PRPL and PRPL guidance over time. With special thanks to Twitter.com for their approvals to use the screenshots in this post.